Zombies Intelligent After All 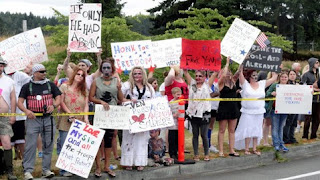 Members of the controversial Westboro Baptist Church showed up to picket at a Seattle-area military base last week, but were confronted with an unusual counter-protest: dozens of people dressed as zombies.

Eight members of the church, known for frequently picketing military funerals and other events as a protest against the progression of gay rights, found themselves confronted with the counter-protest while picketing outside of the Joint Base Lewis-McChord on Friday. The playful counter-protest was launched by Spanaway, Wash., resident Melissa Neace, who spread the word of her idea on Facebook.

“We wanted to turn something negative around, into something people could laugh at and poke fun at,” Neace told The News Tribune. “It was the easiest way to divert attention from something so hateful.”