Beavers Buy Into War on Humanity 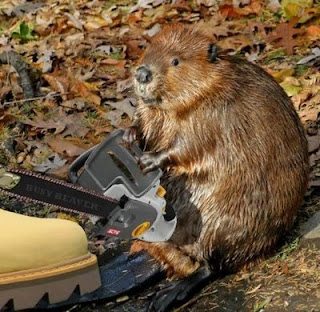 In the past week or so we've seen that squirrels have started the war against human civilization, followed by otters.  Now we find the busy (or is that eager?) beaver aligned against us as well!


A crazed beaver attacked two girls as they swam in a lake at a popular beauty spot leaving them with serious injuries. Eight-year-old Annabella Radnovich and her 11-year-old sister, Alyssa, were playing with their cousins at Lake Anna in Virginia's Spotsylvania County when the 65 pound animal bit and scratched their legs. The sisters were rushed to Spotsylvania Regional Medical Center after the attack just before noon on Sunday.

People not familiar with them are often astonished by the size of full grown beavers, probably because of the relatively good PR that they have had up until now.  Check out the one at the left.  And they're are accustomed to chewing through trees, so their bite strength and the sharpness of their teeth is amazing.


She told q13FOX.com: 'She had felt something touch her leg and she thought it was one of her cousins messing with her.  'And she stopped and looked and pushed it off of her and started running out of the water.' Annabella also thought it was someone in her family fooling around until she felt the animal's claws digging into her legs. Describing the terrifying experience she said: 'It started swimming around me, and then I tried to get out again and it bit my leg.' Annabella told how as soon as everyone realised what was going on they all rushed out of the water.

Far more than squirrels, which have mostly been casually hunted for meat when times were tough, and really do rather well in urban area, beavers really do have a beef with humans.  Much of the initial expansion into the west was fueled by the hunt for beaver pelts, most of which were turned into felt and used to make hats, although it's a very good fur for coats as well.  As beaver became increasingly rare as a result, the hunting crossed the continent and reduced the beaver population to a small remnant of it's initial density


Her mother added: 'Because it went through the muscle tissue, they didn't want to do surgery. 'The main concern is the infection and they're testing the beaver for rabies now.' The girls are not believed to have been given injections against the disease at this stage. 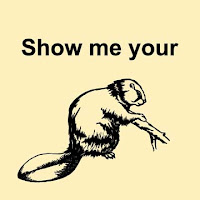 I hope it wasn't rabies, but that's always a possibility.  A beaver could easily catch rabies from an unsuccessful attack by a coyote, fox, raccoon or skunk.


According to Marine Biologists, beaver attacks on humans are extremely rare and when they do happen, it is usually because the animal is rabid.