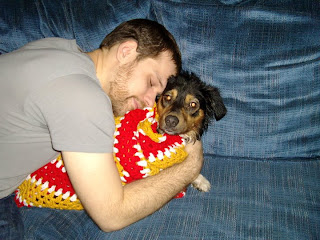 Yesterday, Georgia had a dentist appointment in the morning, so rather than drive two cars to work, Georgia stayed home after the appointment, and tele-worked.  When I came home at 5:30, I expected to be attacked by both dogs, Skye (our aging Siberian Husky) and Hendrix, (our son's Mutt, who is staying with us while they represent the East Coast of the clan at the reunion in Pismo Beach).  Georgia was diligently working on data analysis on the kitchen table.

Skye ambled out and said hi, but Hendrix was nowhere to be found.  We scoured the house, we went outside and checked the fenced yard, and walked the immediate neighborhood calling.  No dog... 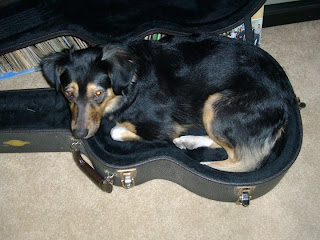 We still haven't quite figured out how she got out of the fenced yard, but we have a couple of theories, that we likely will not test.

We went into full panic mode, and started combing the neighborhood in our cars, asking if anyone had seen a small black and brown dog.  Georgia got one "hit" about 3/4 of a mile up the road, and we both searched the area thoroughly, to no avail.  We called off the search at dark.

Georgia reluctantly called Alex, to get the details of what were on her tags, so we could tell the Animal Shelter if they found her.  He and Kelly were both concerned but utterly unable to do anything from the distance.

We got up at first light, and started the hunt again.  Georgia got a second "hit" somewhere near the previous one, and as I was leaving to meet the carpool, a woman pulled up and reported she had just seen the dog (we were pretty sure by then) on the same road but closer to home, so back she went, while I went to meet the carpool.

About a half hour later Georgia called to report that she had tracked Hendrix down, only a block from home, sitting in the weeds, wet from the nights dew, and with some new burrs stuck in her coat.  She seems none the worse for her night out on the big town of Long Beach (MD), although a little less bouncy than normal.  But that's probably for the best, as she'll be under house arrest for the remainder of her stay.
Posted by Fritz at 7:14 PM