Rat meat: it's what's for dinner


We all know starving artists will eat just about anything, but did you know that for some that includes rodent?

Realistically, a rat isn't much different than a squirrel, except the squirrel has a lovely fluffy coat, and prefers to dine on power and telecommunication lines instead of discarded or carelessly stored human food.  But rednecks eat squirrels, and a good New York artist would not be caught dead emulating a redneck.


According to the New York Observer, the five course meal Chef Yuri Hart cooked up was nothing like Roadkill Stew. It included a goat cheese crostini with a small piece of rat meat and a shot glass of gazpacho, two circles of rat and pork terrine over a deconstructed salad. Also featured was "Rat Two Ways"--braised rat and a roasted half rat over a sweet corn salad -- a rat-free lemon sorbet garnished with an edible flower, and finally, French toast topped with a slice of crispy rat jerky (head, claws, and all).

Now, if she had served rat tartare, that would have been avant garde.


The piece, entitled “Tomorrow We Will Feast Again on What We Catch,” explores the idea of self-sustainability and the multitude of processes which we go through to get our food. It also required guests to pony up $100 and sign a liability waiver just in case the rat did not sit too well with anyone.

But there was no need to worry about the rats' cleanliness. They come from a lab facility in California. Ginn told the New York Observer that the rats arrived in bulk, whole, unskinned and frozen:

You really haven't lived until the parasites that lived on a cooling corpse start to crawl up your arm as you try the skin the animal. 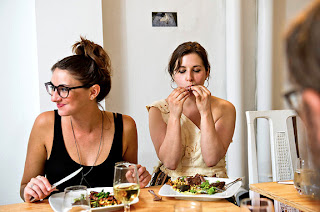 "You should have seen my freezer," Ginn said. "I gave over my entire house for this."

For the occasion, Ginn wore a self-made, one-shoulder cocktail dress made of 200 rat pelts to the event.

Going to her "Kickstarter page", where an allegedly starving artist (although it looks like she had plenty of roadkill to eat along the way) is kind of amusing.  She is talking about the discovery that you can make leather for yourself from the hide of dead animals.  I think this deserves at least one fur clad cave girl!

You can also find pictures of Laura herself sometimes scantily clad in skins here.

Of course, a long long time ago, Ted and I went through a similar discovery.  Being poor (I was a grad student and he was an undergrad at Oregon State University), and having land available to hunt on, we got into the guns and shooting stuff thing (he's still in it) to eat.  One of the sidelights we got into was tanning hides of the victims prey.  I had big tubs of chemicals in the garage, and we tanned deer, racoon, rabbit, and squirrel hides.

Now she needs to take a few years off from the artist thing, and go practice her skills "in the wild".