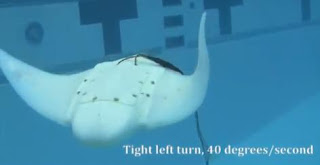 ...Bart-Smith and her colleagues at three other universities are trying to emulate the seemingly effortless but powerful swimming motions of rays by engineering their own ray-like machine modeled on nature.

They are designing an "autonomous underwater vehicle" that someday may surpass what nature has provided as a model. The vehicle has potential commercial and military applications, and could be used for undersea exploration and scientific research.

"We are studying a creature to understand how it is able to swim so beautifully, and we are hoping to improve upon it," she said. "We are learning from nature, but we also are innovating; trying to move beyond emulation."

Bart-Smith's team, which includes researchers at U.Va., Princeton University, the University of California-Los Angeles and West Chester University, are modeling their mechanical ray on the cow-nosed ray, a species common to the western Atlantic and Chesapeake Bay.

But will they include the stinger? What is it for? Scaring bathers, and annoying fishermen and eating crabs and oysters like the original?  Sorry, that niche is full.


Bart-Smith's ultimate goal is to engineer a vehicle that would operate autonomously, and could be deployed for long periods of time to collect undersea data for scientists, or as a surveillance tool for the military. It also could be scaled up, or down, to serve as a platform carrying various payloads, such as environmental monitoring instruments. For example, it possibly could be used for pollution monitoring, such as tracking the locations of underwater oil spills.

We already have pretty decent Remote Operated Underwater Vehicles (ROVs), so I think that's kind of an excuse, and a pretty standard one at that:  "We wanna do it to solve pollution, and stuff!"  They just want to build it 'cause it's cool.
Posted by Fritz at 7:19 PM