Opossums may someday provide an antidote to nearly all forms of poison, including everything from snakebites to ricin.

The Journal of Venomous Animals and Toxins has found that the American opossum produces a protein known as Lethal Toxin-Neutralizing Factor (LTNF). And as the Boing Boing blog points out, the LTNF protein is exactly what it sounds like, seeking out otherwise lethal poisons that have entered an opossum's body and neutralizing them.

Amazingly, tests on the opossum LTNF found that the protein even left the marsupial creatures immune to poisons from snakes on other continents that the American opossum had not been previously exposed to. 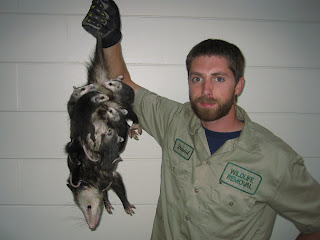 So this is pretty cool; how does a single protein recognize and neutralize a wide variety of deadly toxins, including ones it wasn't exposed to in the course of evolution, and not have any harmful effect on organisms that carry it?


scientists then injected mice with the LTNF protein and subjected the rodents to venom from otherwise deadly creatures, including Thailand cobras, Australian taipans, Brazilian rattlesnakes, scorpions and honeybees. When the venom did not kill the mice, the mice were then exposed to deadly poisons, including ricin and botulinum toxin. And again, the LTNF protein was able to diffuse the poison, leaving the mice unharmed.

I would think at top priority ought to be getting that protein purified, it's amino acid sequence and folding determined, and a possible route to clinical production explored (Plant the gene in E. coli?).  Not that I have a problem with grinding up Possums to make medicine, but there might be a better way?  Or maybe we could just scrape enough off the highways.


Interestingly, the journal entry on LTNF was published more than 10 years ago, in 1999. As several readers have pointed out, this raises questions as to whether the protein benefits would be applicable to humans and why the test results are only now making news.

How did that get overlooked so long?  Did the post-doc who did work get a job where he/she/it didn't need to produce anything, like say become a regulator?
Posted by Fritz at 5:00 AM