US Warming Trend Takes Another Hit

After a couple days of hiatus, Anthony Watts at Watts Up With That, announces the submission of a major paper, which, if generally accepted, will result in cutting the warming trend observed in the US from 1978 to the present from +0.309 C per decade to +.155 C per decade:


Anthony Watts of California, Evan Jones of New York, Stephen McIntyre of Toronto, Canada, and Dr. John R. Christy from the Department of Atmospheric Science, University of Alabama, Huntsville, is to be submitted for publication.

A reanalysis of U.S. surface station temperatures has been performed using the recently WMO-approved Siting Classification System devised by METEO-France’s Michel Leroy. The new siting classification more accurately characterizes the quality of the location in terms of monitoring long-term spatially representative surface temperature trends. The new analysis demonstrates that reported 1979-2008 U.S. temperature trends are spuriously doubled, with 92% of that over-estimation resulting from erroneous NOAA adjustments of well-sited stations upward. The paper is the first to use the updated siting system which addresses USHCN siting issues and data adjustments.

The new improved assessment, for the years 1979 to 2008, yields a trend of +0.155C per decade from the high quality sites, a +0.248 C per decade trend for poorly sited locations, and a trend of +0.309 C per decade after NOAA adjusts the data. This issue of station siting quality is expected to be an issue with respect to the monitoring of land surface temperature throughout the Global Historical Climate Network and in the BEST network.

Essentially, these scientists contend that the US climate data is seriously contaminated by an artificial warming trend, caused by poorly sited weather stations, which continue to warm as civilization, and it's excess heat and landscape changes encroach on them. Moreover, the homogenization techniques used to normalize data across stations, and changing sites has the effect of magnifying this artifact.  The key figure, below, shows that with badly sited stations included, the higher warming trends are observed across the country; with the poorly sited stations thrown out, the warming is much less. 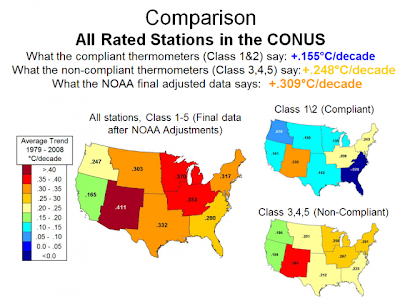 This is generally consistent with, and complementary to a study of temperature data world wide that also suggested that the normalization process was adding considerably to warming trends over the last century.

Expect vociferous and ad hominem attacks on this study and it's authors.
Posted by Fritz at 6:00 AM