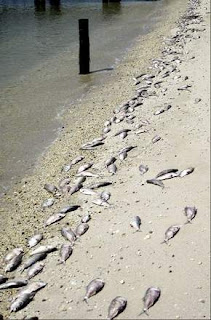 Storm is blamed for fish kill in Potomac River

A summer storm that spawned a waterspout in the Potomac River last week is likely to blame for killing about 4,300 fish that washed ashore July 19 in Piney Point, according to the Maryland Department of the Environment.

The July 15 storm brought water near the river bottom that was low in oxygen into the area, and the fish, mostly menhaden and striped bass, essentially suffocated, Jay Apperson, a spokesperson for MDE, said this week.

As winds abruptly changed during the storm, the surface water was pushed out and essentially backfilled by low-oxygen bottom waters, according to MDE, a phenomena called a seiche event. The event can happen so quickly that fish are unable to escape to better water and are unable to breathe. They likely died that day, sank to the bottom and then floated to the surface after a few days, when the tide pushed thousands of the fish on shore along Lighthouse Road. 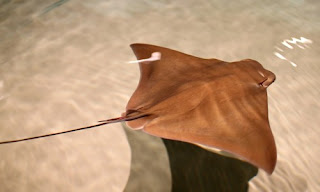 
The summer's stormy weather is hurting the state's efforts to boost sales of the Chesapeake ray. The severe weather is keeping watermen ashore and the heat is sending the rays into deeper water, explains Mike Hutt of the Virginia Marine Products Board.

The cownose ray, the so-called "Veal of the Sea" is caught in the Chesapeake Bay from May to September.

The tornado that ripped through Hampton recently damaged Armory Seafood, the only processing plant in Virginia. Meade Amory says the tornado damage shut down processing for about a month. He hopes with the facility repaired and better weather, the catch and processing will pick up soon.

Actually, I wasn't aware that there was any kind of commercial fishing on the Cownose Ray in Chesapeake Bay.  I've often speculated that one could be made.  The rays are edible (I've had it) but I didn't consider them that good.  But they are abundant.

As for the veal thing, I don't like veal either.  I do see a superficial similarity.  Ray flesh is unlike any fish flesh I've seen before, a light pinkish color, shot through with red specks of some sort.  It is rather firm, and a bit pork like, and not awfully fishy (at least if fresh).

It is thought that Cownose Ray populations have risen since their major predators, sharks off the Atlantic coast, have been decimated (or worse, decimate means to take one in ten, this is more like nine in 10).  However, the reproductive potential of rays is low, as females have a single pup yearly, born live, like mammals, and most sharks.  A serious fishery would need to be well regulated to not do serious damage to their population.
Posted by Fritz at 7:22 PM