Kafka Was an Optimist 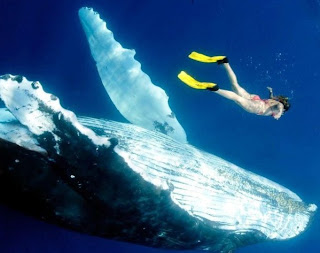 A pretty good article by George Will on how the feds can get you, if they want, using the example of the captain of a whale watching vessel accused of a series of crimes:

... our unhinged government, with an obsession like that of Melville’s Ahab, has crippled Nancy Black’s scientific career, cost her more than $100,000 in legal fees — so far — and might sentence her to 20 years in prison. This Kafkaesque burlesque of law enforcement began when someone whistled.

Black, 50, a marine biologist who also captains a whale-watching ship, was with some watchers in Monterey Bay in 2005 when a member of her crew whistled at the humpback that had approached her boat, hoping to entice the whale to linger. Back on land, another of her employees called the National Oceanic and Atmospheric Administration (NOAA) to ask if the whistling constituted “harassment” of a marine mammal, which is an “environmental crime.” NOAA requested a video of the episode, which Black sent after editing it slightly to highlight the whistling. NOAA found no harassment — but got her indicted for editing the tape, calling this a “material false statement” to federal investigators, which is a felony under the 1863 False Claims Act, intended to punish suppliers defrauding the government during the Civil War.

She has also been charged with the crime of feeding killer whales when she and two aides were in a dinghy observing them feeding on strips of blubber torn from their prey — a gray whale.

To facilitate photographing the killers’ feeding habits, she cut a hole in one of the floating slabs of blubber and, through the hole, attached a rope to stabilize the slab while a camera on a pole recorded the whales’ underwater eating.

So she is charged with “feeding” killer whales that were already feeding on a gray whale they had killed. She could more plausibly be accused of interfering with the feeding.

Now, this isn't a partisan thing, it's a bureaucratic thing.  Black's problems began in 2005, back in the era when Preznit Bush was, at least according to liberals, allowing businesses run wild and commit all kinds of environmental and economic crimes.  The bureaucracy has it's own agenda, and they are permanent, where administrations come and go.   All it takes is one asshole with a pencil to ruin some one else's life.

Rule 5 Sunday done come on Sunday this week at the Other McCain, with "Every Rose Has It's Thorn."
Posted by Fritz at 8:47 AM