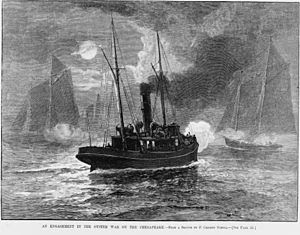 A Lecture on the Chesapeake Oyster Wars at The Marine Museum in Solomon on August 4.

The Calvert Marine Museum presents Lieutenant Gregory L. Bartles speaking on The Chesapeake Oyster Wars in the museum’s auditorium on Thursday, August 2 at 7:00 p.m. Lt. Bartles is the Area 8 Commander/Agency Historian for the Maryland Natural Resources Police and was responsible for bringing the oyster war cannon to DNR. The cannon is currently on exhibit in the museum’s lobby through the end of September. The lecture is free and open to the public.

In 1865, Maryland realized oysters were not an infinite resource, and implemented the first restrictions on their harvest, started requiring annual permits for their harvest. Watermen resisted, and in 1868, Maryland formed the Maryland Oyster Navy, the predecessor of Maryland Department of Natural Resources to fight poaching by local watermen and encroaching New Englanders, fleeing their own depleted beds.  Virginia too took measures to fight the poaching, and in1882, the Governor of Virginia led an expedition against armed and organized oyster poachers, and arrested 46 and seized 7 boats.

An amusing incident from "the second" oyster war, the escape of "Dancing Molly".


The Pirate Brides. The crew of the Dancing Molly was not so complacent. When the Pamlico came upon the little craft "lying close in one of the inlets on the Eastern Shore," it appeared as though no crew members were on board. Thinking to take the unmanned craft as a prize, the crew of the Pamlico bore down upon the vessel. The vessel, though unmanned, was not unwomanned. The captain's wife and two daughters were still aboard, and when their cries for help went unheard by the crew on shore, they unreefed the sails themselves and made their escape. As the Pamlico raced to block the mouth of the inlet the Dancing Molly strained at its sails to escape. The women were "equal to the emergency." All three "were skilled in handling the sails and were determined not to be taken." Despite solid shot flying past them, the three women continued on their way and reaching the open waters of the Bay, easily escaped into Maryland waters with a stiff breeze behind them. According to the Norfolk Virginian of March 4, 1883, spectators along the Virginia shore, though opposed to dredging, "really wished for the safety of the tiny craft when they saw it was simply manned by three women, and when the Dancing Molly got safely out the group of Virginians chivalrously gave three cheers for the pirate's wife and daughters."