Honey, We Shrunk the Kids...

A British study called One False Move, investigating the mobility of children, found that the average eight-year-old saw its ‘home habitat’ shrink to one-ninth of its size within a single generation. In 1970, 80% of British kids 7 or 8 years of age were allowed to go to school unsupervised; by 1990, this figure had dropped below 10%.

The result of this gradual shrinkage of children’s habitat, is the effective end of the outdoor childhood. This evolution, by and large underreported, is put in stark perspective by this map. Zooming in on parts of Sheffield, in the north of England, it pictures the differences in size of the stomping grounds of four generations of the Thomas family - each snapped at eight years of age: 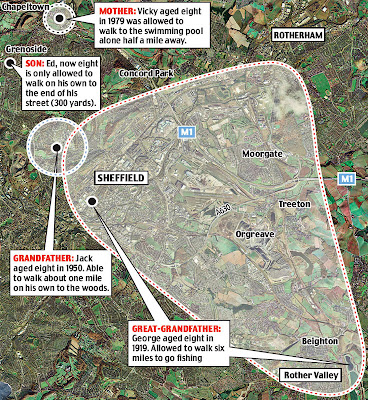 I can certainly see that in my life.  At eight (back in 1959 or so), I was walking about a mile to and from school in Culver City, a town surrounded by Los Angeles, or to and from the public pool, in summer.  We had the freedom to chase fish and tadpoles in La Ballona Creek, even at that time, a giant concrete drainage ditch nearby, with foul run off in the bottom.  We had even wider ranges when we visited our cabin in the San Bernardino Mountains.  We were allowed to wander about anywhere we wanted, carrying our BB guns, although I doubt we went much farther than a couple of miles unaccompanied.  Such lack of parental attentiveness would practically be considered child abuse today.

At eight, our kids certainly had the run of the street, and possibly a few streets further. A half a mile at most.  But most of their spare time was taken up by soccer or video games.

Email ThisBlogThis!Share to TwitterShare to FacebookShare to Pinterest
Labels: Me, zero tolerance