Teenagers Want to Save the Bay 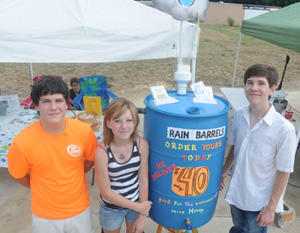 Shippensburg teens offer clean water solution
As I've said previously, I don't usually fall for these "feel good" stories about kids and education and how they're all making a difference to the Bay, but today the Bay news is full of nothing.  And these kids are at least making a useful product, which does at least a little environmental good, rather than making art about it or otherwise proselytizing.


A group of Shippensburg teenagers are fighting water pollution and lowering water bills by providing rain barrels to the community.  For a $40 donation, the group Your River Starts Here delivers a blue, 55-gallon barrel to a person's home.

When connected to the building's drain spout system, the barrel collects water that drains from the roof. Without the barrel, the water would travel toward a storm drain, picking up pollutants, such as motor oil, fertilizer and debris along the way. The contaminated water would then drain into local streams and eventually the Chesapeake Bay and then the Atlantic Ocean, hurting the ecology.

Your River Starts Here members are siblings Miles and Liana Culbertson, 16 and 13, respectively, and friends Noah Montano, 13, and Chris Hough, 17. The teens started the group on their own accord. Being in a family of environmental activists, the Culbertsons felt it was their duty to "focus on the ounce of prevention, rather than the pound of the cure," Miles Culbertson said.

I would buy a rain barrel from them for $40, if they would deliver it and install it.  You might remember that Georgia and I "rescued" a barrel that washed down the Bay after Tropical Storm Lee last year, intending to outfit it as a rain barrel.  It's still sitting in the garage, taking up space, waiting for us to figure out how to get it installed and used.

I'm not so much concerned with the pollution consequences of rain coming off our roof, it naturally drains backwards off our building lot into the forested lots behind us, and rarely does any run off into the stream at the bottom.  Moreover, since we rarely fertilize or use pesticides, any water coming off our lots is likely to be pretty clean.  However, water use is a consideration; our community is stretched to provide sufficient water, especially in summer, and having a second source for watering the plants would be handy.


"Sixty percent of your water bill is yard maintenance, so you can more than cut your bills in half with rain barrels," Miles Culbertson said.