I apologize for the slow blogging lately, but hey, life happens, too.  The reason I slacked off kast night was that Georgia and I went to the Lynyrd Skynyrd concert at the St. Leonard Volunteer Fire Department.  The fire department, which serves our area has a number of concerts during the summer, which are their major fund raisers.  They're mostly very country types of acts, but we go to one or two a year, just for fun, and to help the fund raising. 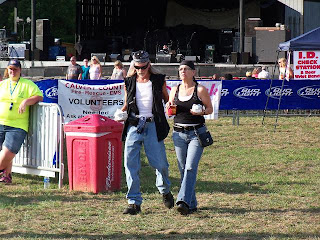 One of the fun things at concerts is people watching.  Skynyrd concerts (this is our second) bring out a different crowd. Lots of old geezers in funny clothing.  Oh wait; that's us...  And lots of young people too.  I was so flattered to get my wrist band so I could buy a $5 beer. 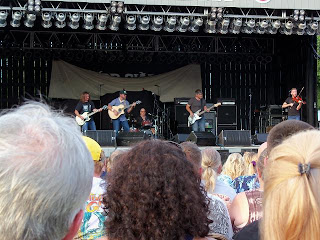 Drake White and his band opened for Skynyrd.  Mostly young people, Drake White (the acoustic guitar second from the left) is a wanna be Hank Williams Jr.  It was OK, but the violinist on the right was the star IMHO. 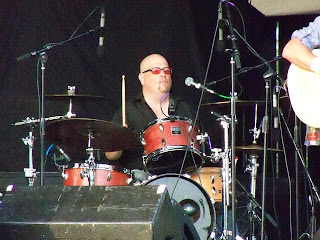 Rick from Pawn Stars seems to be their drummer.  But they seemed to be having fun, and everybody in St. Leonard was drinking beer so it was OK. 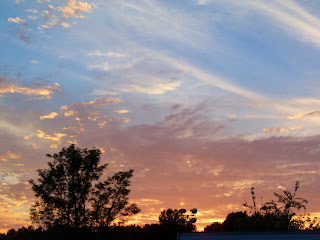 By the time they finished their fairly short set, the sun was setting over the ranks of porta-potties, and the buses carrying Skynyrd was pulling into the lot. 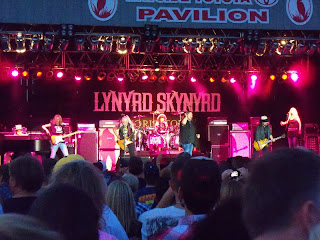 As you're probably aware, Skynyrd is pretty much reformed from remnants of the original band after a number of deaths, including a plane crash in 1977 which killed and crippled some of the original members, including the founding lead singer  Ronnie Van Zandt.

Skynyrd  was, well Skynard.  They sounded pretty much like the original recordings but conveyed a lot of energy.  It must be hard to do some days... 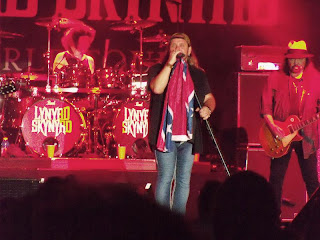 When the band reformed in 1987, Ronnie's brother Johnny took over the role, and does a pretty good job of looking and sounding like his older brother. 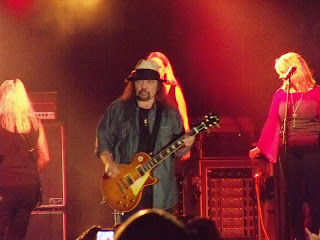 Gary Rossington is the only founding member still with the group.  One of three guitartists, I would say he is the least flamboyant.  Perhaps he has less to prove. 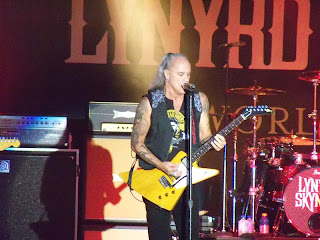 Not quite a founding member, but close, Rickey Medlocke grew up with the original cast, and played and sang with the band some in the 70's.  He had his own band 'Blackfoot' which played from the late 60s to the early 90s.  He is, in fact, a Blackfoot Indian Native American.  He joined Skynyrd in 1996. 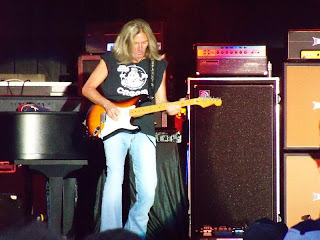 Mark Matejka, the third guitarist, joined the band in 1996, after 'Hot Apple Pie", 'The Charlie Daniels Band' and 'Sons of the Desert'. 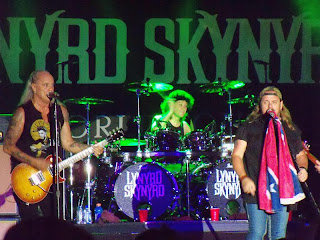 Michael Cartellone, drummer for the band since 1999, and formerly of 'Damn Yankees' and 'Accept'. 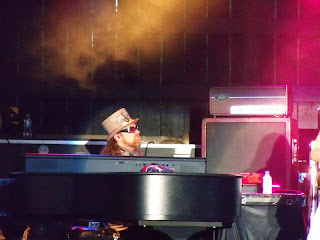 Peter Keys (Peter Pisarczyk) joined Skynyrd in 2009 as keyboardist, following the death of Billy Powell, an almost founder, having arisen from the roadie ranks in 1972. 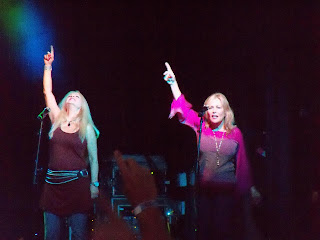 The twirling girls.  Back up vocalists and visual highlights.  I can't figure out their names, oh wait, from the Skynyrd site itself:

Anyway, it was a good night.  Beer was drunk, music was listened to, and money was raised for the local fire department.
Posted by Fritz at 8:41 PM