Marvin McCumbers Jr. of McDaniel and his dad Marvin of Federalsburg did not catch many fish during an early morning fishing trip, but instead helped save the life of an injured bald eagle. Both saw a bird dive into the Chesapeake Bay, but did not pay any attention to it until it began to splash.

Injured while diving for prey?  Not common, but I suppose it happens once in a while.  I once saw an Osprey who had latched onto something too big to lift, and it swam it to shore. But once there, it was able to fly off when we approached. 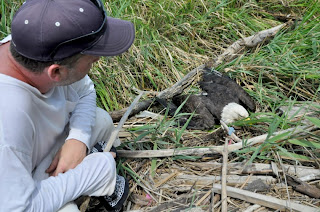 “It looked like it was really struggling,” Marvin McCumbers Sr. said, “It was trying to swim to shore. That’s when we knew it was hurt. It wasn’t ‘til it came closer we could see what kind of bird it was.” The large bald eagle swam for nearly an hour before reaching a small beach off Bay Shore Road. The McCumbers said they began calling rescue agencies when they knew the eagle was hurt including the Natural Resources Police before reaching the Tri-State Bird Rescue and Research...

While waiting for someone to help, the McCumbers made sure the bird had water to drink and fish to eat. “He really seemed grateful for the fish. I knew that swim took a lot out of him, but we couldn’t help him until he made it to land,” McCumbers Jr. said.

I doubt if a two hour wait calls for either food or water for an eagle.  But I'm sure it made them feel better.  Honestly, I'd be surprised if the eagle ate or drank while being harassed (from it's point of view) by two huge predators.


The two men talked to the eagle while gently trying to wrap it in a large white blanket, making sure not to cause more injury to its right wing and leg. The eagle seemed nervous and tried to scamper away from the two men, but after a few minutes the eagle calmed, allowing the McCumbers to carry the bird to be placed in a large box.

“This is sickening, it is a bald eagle. Everyone should have come to help. We want everyone to start caring. We care,” McCumbers Sr. said as they carefully positioned the box in the back of his son’s SUV.

The eagle got picked up and taken to the animal rescue center, where presumably, it will be allowed to heal and returned to the wild if it is able to fly and hunt again.  If damage beyond it's ability to heal has occurred, it's unlikely to ever fly again, and will end up being on display somewhere.

I'm a bit torn.  Generally speaking, I'm against messing with evolution.  An eagle that's damaged itself to the point that it can't fly even for a short period is usually a dead eagle, either by starvation or predation. Saving such a bird risks weakening the gene pool, however slightly.  At the same time, eagles are a magnificent bird (if not exactly rare around here), and I would hate to lose one unnecessarily.  I'd probably end up trying to get it rescued too..
Posted by Fritz at 6:38 PM