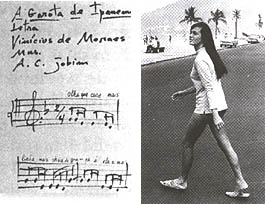 "Tall and tan and young and lovely..."

You might have come across the bossa nova classic while on hold on the phone, during a long elevator ride, or in a cafe in Beirut or Bangkok _ but you've heard it. It's been recorded by everyone from Frank Sinatra to Amy Winehouse, and survived bad lounge singers and Muzak incarnations to become, according to Performing Songwriter magazine, the second most recorded song in the world.


You can find instructions for playing the song on the guitar here.


On stage together, for the first and only time, were the architects of bossa nova: Tom Jobim on piano and Joao Gilberto on guitar, with help from the poet Vinicius de Moraes, who gave "The Girl" her lyrics. Also performing was the vocal group Os Cariocas.

Bossa nova was still young then, somewhat of a novelty even in Rio. The name meant "new trend" or "new way," and that's what it was: a fresh, jazzy take on Brazil's holiest tradition, the samba.

The rhythm was the same. But where samba was cathartic, communal, built on drums and powerful voices, bossa was intimate, contemplative, just a singer and a song. The melody, on guitar or piano, stepped up to the front. Percussion receded, played sometimes with brushes for a softer texture reminiscent of surf washing on the sand.

The 1962 show at the club Au Bon Gourmet established bossa nova, wrote Castro in his book about the genre. It didn't just introduce the Jobim-penned "Girl"; other bossa classics, such as "So danco samba" and "Samba da bencao," also were played publicly for the first time. 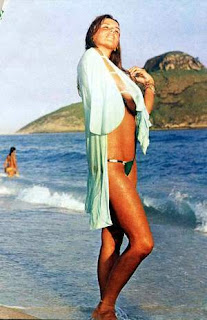 As for the girl who inspired the song, Heloisa "Helo" Pinheiro?

Ipanema is a trendy, rather artsy neighborhood in south Rio de Janeiro. To the west is the upscale area of Leblon and to the east is Aproador and Copacabana. A block off Ipanema Beach, on the northwest corner of Rua Montenegro and Rua Prudente de Moraes was Tom Jobim's favorite hang-out, the Bar Veloso. A veranda-style, open-air cafe, this was the place to drink beer, smoke cigarettes, read the paper, chat with friends, and watch the pretty girls. 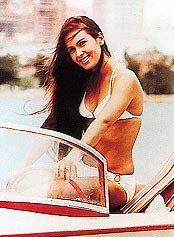 Almost every day a certain girl passed by the Veloso. Often in her school uniform, sometimes in her two-piece bathing suit she was, of course, tall, and tan, and young and lovely with long brown hair and green eyes and a rather sensual way of swaying her hips. She did not go unnoticed by Jobim and friends who often greeted her with whistles and cat-calls. The girl, however, never responded to the men. Never did she stop to talk; indeed never did she even make eye contact with bar’s patrons. Each day when she walked to the sea, she looked straight ahead, not at anyone else. And Jobim was in love.


If "Helo" was 17 in 1962, that makes her about, well as she says, "you do the math".  Along the way, she married, had kids of her own, modeled for swimwear, jewelry and Brazilian Playboy.  She and her song popularized the 2 piece swimsuit, and led directly to the daring swimsuits of modern times.

Not many women get to claim credit for having inspired a music genre, and a style of clothing.

Thanks to Wombat-Soccho, who picked this up in generic "Rule 5 Monday" this week at The Other McCain, and to the Classical Liberal, who scooped it up with "Debt Bomb" and other Rule 5 posts.
Posted by Fritz at 8:41 AM