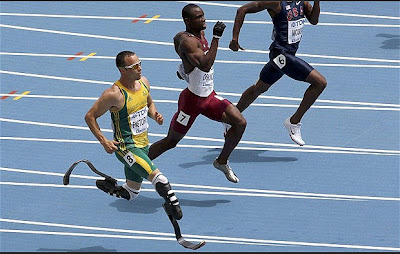 The American, winner of Olympic gold medals in the 400m in 1996 and 2000, was talking specifically about Oscar Pistorius, the South African known as ‘blade runner’.

While he stressed that he considers Pistorius, who has been allowed to compete at the London Games in the able-bodied 400m, as a friend, the Dallas-born sprinter revealed that he considers the principle of disabled competitors lining up alongside those without specially developed limbs flawed.

When asked at a Times+ event whether he thought Pistorius's inclusion was political correctness gone mad or an inspiring human story, the 44 year-old said: “I think it is both. I know Oscar well, and he knows my position; my position is that because we don’t know for sure whether he gets an advantage from the prosthetics that he wears it is unfair to the able-bodied competitors.

My opinion, FWIW.  If his current prosthetic legs weigh approximately what his original legs would, let him complete.  If not, add weight to make them equal.  If he wins, give him an asterisk.

I don't think we need to worry about athletes having their legs amputated and replaced by prosthetics, at least until after one of the them wins gold.