Is There No Limit to Their Perfidy?

Olympic beach volleyball players have come across an unexpected handicap - squirrels burying their nuts on their courts.

The rodents have been burying beechnuts and acorns on six sandy practice courts at London's St James's Park.

And bikini-clad players have been left grimacing as they land barefoot on the squirrel snacks.

Groundsmen now have to rake the sand before practice sessions, reports The Sun. 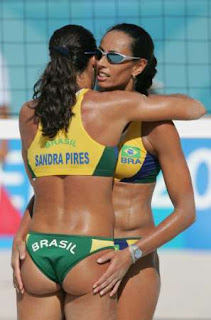 We've recently been alerted to the Wildlife Rebellion being waged against human race by by Eastern Gray Squirrels, River Otters, Canadian Beaver and Raccoons.  But this is the first report that the action goes beyond US borders and onto out ally, Great Britain.  No doubt, this is being carried out by those rat-like expatriate Eastern Gray Squirrels (Grey Squirrel in England), that have invaded the British Isles, and are starting to displace the native Red Squirrels. 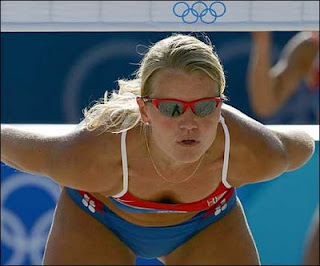 Six courts, two warm-up courts and a hospitality lounge have been created in the leafy lakeside park close to Buckingham Palace.

The 15,000-seat main competition arena in nearby Horseguards Parade has not been affected.

A London 2012 source told the newspaper: "It's nuts but true. It seems squirrels have been invading the courts and either hiding or dropping their nuts.

"But it won't affect the competition because the sand is regularly raked."

Linked at The Classical Liberal "Barracuda!" At the DaleyGator "Heather Rene Smith takes us on her Rule 5 Journey." Thanks to Wombat-Soccho, who picked this up in generic "Rule 5 Monday" this week at The Other McCain.
Posted by Fritz at 6:00 AM