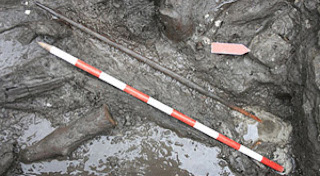 Archaeological research carried out at the Neolithic site of La Draga, near the lake of Banyoles, has yielded the discovery of an item which is unique in the western Mediterranean and Europe. The item is a bow which appeared in a context dating from the period between 5400-5200 BC, corresponding to the earliest period of settlement. It is a unique item given that it is the first bow to be found intact at the site.

According to its date, it can be considered chronologically the most ancient bow of the Neolithic period found in Europe. The study will permit the analysis of aspects of the technology, survival strategies and social organization of the first farming communities which settled in the Iberian Peninsula.

The bow is 108 cm long and presents a plano-convex section. Worth mentioning is the fact that it is made out of yew wood, Taxus baccata, as were the majority of Neolithic bows in Europe.

Being made of wood, bows wouldn't preserve very well, so relatively few could be expected to found relative to the number produced.  The late neolithic in Europe was a place where people had begun to settle and raise crops and livestock, so this isn't necessarily the weapon of a subsistence hunter, but could belong to a farmer as a weapon against predators or human enemies.

Certainly the use of Yew wood speaks of a long tradition of bow use prior to this bow, as Yew was used for bow making for centuries in Europe for it's unique properties:


Traditional English longbows are self bows made from yew wood. The bowstave is cut from the radius of the tree so that the sapwood (on the outside of the tree) becomes the back two thirds and the belly, the remaining one third, is heartwood. Yew sapwood is good only in tension, while the heartwood is good in compression. However, compromises must be made when making a yew longbow, as it is difficult to find perfect unblemished yew. The demand for yew bowstaves was such that by the late 16th century mature yew trees were almost extinct in northern Europe.

Older bows, predating the Neolithic, back in to the Paleolithic ("Old Stone Age") have been found in northern Europe.

All that's missing is an illustration of a bow and arrow wielding Neolithic maiden... 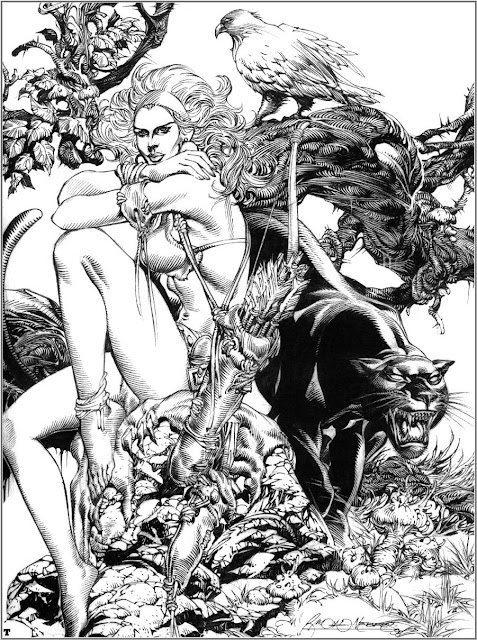 Special thanks to Wombat-Socho who featured this in his weekly Rule 5 post "Touch and Go" over at The Other McCain.