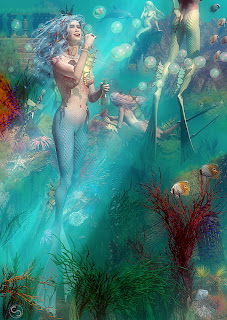 This official release from NOAA denies the existence of those luscious, and sometime not so luscious denudzens of the deep:


Mermaids — those half-human, half-fish sirens of the sea — are legendary sea creatures chronicled in maritime cultures since time immemorial. The ancient Greek epic poet Homer wrote of them in The Odyssey. In the ancient Far East, mermaids were the wives of powerful sea-dragons, and served as trusted messengers between their spouses and the emperors on land. The aboriginal people of Australia call mermaids yawkyawks – a name that may refer to their mesmerizing songs. 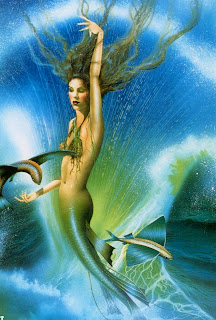 Not to mention the early colonial sailors of the America's who were thought to have confused manatees and dugongs  with mermaids.  A glimpse of a tail and a desperate and/or optimistic imagination, perhaps?


The belief in mermaids may have arisen at the very dawn of our species. Magical female figures first appear in cave paintings in the late Paleolithic (Stone Age) period some 30,000 years ago, when modern humans gained dominion over the land and, presumably, began to sail the seas. Half-human creatures, called chimeras, also abound in mythology — in addition to mermaids, there were wise centaurs, wild satyrs, and frightful minotaurs, to name but a few.

But are mermaids real? No evidence of aquatic humanoids has ever been found. Why, then, do they occupy the collective unconscious of nearly all seafaring peoples? That’s a question best left to historians, philosophers, and anthropologists. 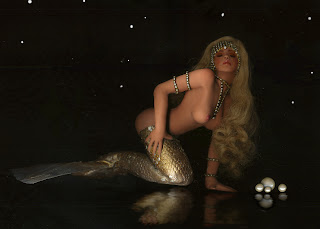 I'm glad they got around to telling me.  Now I won't have waste all that time looking fro mermaids when I go fishing.

Why does NOAA feel obliged to deny the existence of mermaids now?


Credit (or blame) Animal Planet (a branch of Discovery), which last month aired a TV show called "Mermaids: The Body Found." It was a documentary-style show that “paints a wildly convincing picture of the existence of mermaids, what they may look like, and why they’ve stayed hidden...until now,” according to the show’s press Web page. Indeed, it says, “'Mermaids: The Body Found' makes a strong case for the existence of the mermaid...” 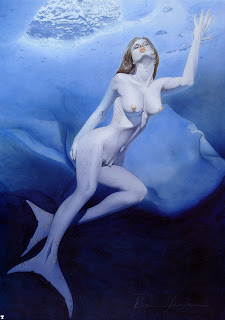 I missed that one.  Well, I'm sure it will be replayed many times.


Though the filmmakers acknowledged that the film is science fiction, for many people it was indeed “wildly convincing.” The show was an "X-Files" type fanciful mix of state-of-the-art computer generated animation, historical fact, conspiracy theory and real and faked footage sprinkled with enough bits of scientific speculation and real science to make it seem plausible. In fact, there were even interviews with real NOAA scientists. As with all good science fiction, there’s a grain of science and truth to it: the so-called “aquatic ape1” idea it touted (suggesting our evolutionary ancestors may have lived in marine environments) is a real hypothesis, but has nothing to do with mermaids. 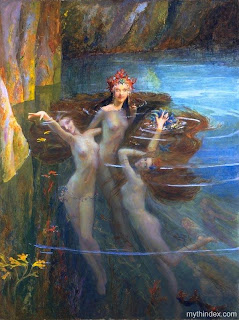 As New York Times reviewer Neil Genzlinger noted, the story is “a fictional account built on a few strands of fact and made to look like an actual documentary. If you know those ground rules, it’s a rather enjoyable and intriguing piece of work, in the same vein as 'The Blair Witch Project'.” It seems that many people weren’t aware of those ground rules, and were fooled into thinking that there was more fact than fancy in the show. 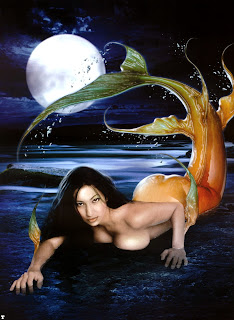 Yep, it's kind of odd how the "serious" science type channels have started doing more and more  shows that, if they don't out and out promulgate beliefs in mythical animals like Yeti, Sasquatch, and Chubacabra, at least do a dishonestly good job of attempting to be "fair" at trying to present both sides of the story.  It's almost as if money is more important to them than the truth...


1 The aquatic ape hypothesis (AAH) is a hypothesis about human evolution, which posits that the ancestors of modern humans spent a period of time adapting to life in a wet environment. AAH emerged from the observation that some traits that set humans apart from other primates have parallels in aquatic mammals. It was first proposed by German pathologist Max Westenhöfer in 1942, and then independently by British marine biologist Alister Hardy in 1960. After Hardy, the most prominent proponent has been Welsh screenwriter Elaine Morgan, who has written several books on the topic.

I read the Morgan book many years ago.  I thought it was interesting, but not completely convincing.

The Classical Liberal links to this in "Hot Legs!" Special thanks to Wombat-Socho who featured this in his weekly Rule 5 post "Touch and Go" over at The Other McCain.
Posted by Fritz at 7:58 PM