Fracking A! US CO2 Emissions Fall to 90's Level 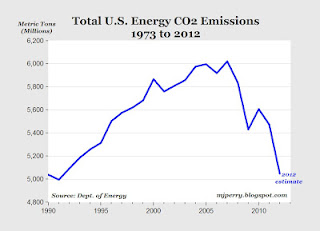 For US energy-related carbon emissions, fuel switching to gas is back to the future. After the first quarter, the USA's 2012 emissions are falling sharply again and may drop to 1990 levels, or just slightly above that important milestone, according to data in EIA's latest Monthy Energy Review: eia.gov/totalenergy/data/monthly/pdf/sec12_3.pdf.

The first quarter 2012 reduction of 7.5% makes it possible that this year emissions will fall back essentially to the 1990 level of 5,039 million tons. That is shockingly good news.

The 1990 level of carbon emissions is an important measuring stick, as it is often used as a critical data point for judging progress in reducing a nation's carbon emissions.

Why are US carbon emissions plummeting back to 1990 levels?

First and foremost are sharp reductions from electric power production, as a result of fuel switching from coal to gas, rising renewable energy production, and increasing efficiency. Yet, the shale gas revolution, and the low-priced gas that it has made a reality, is the key driver of falling carbon emissions, especially in the last 12 months.

One of the main talking points against fracking has been that it increases CO2 production, but in fact, when  substituted for coal, natural gas produces much less CO2 per unit energy produced.

It's almost like the opponents don't really care about CO2; they just need some excuse to oppose cheap and available energy.
Posted by Fritz at 9:51 PM