We're still rehashing Donald Trump utterly unsurprising announcement that  Trump Throws His Hair Into the Ring for 2024 (Stephen Kruiser at PJ Media). Sundance at CTH is ecstatic, He’s Back, President Donald J Trump Officially Declares His Candidacy to Run for President in 2024. Vicky Taft at PJ Media, 'We Have to Save Our Country': Trump Puts Democrats on Notice. Insty, THE MAN JUST DON’T KNOW HOW TO LIE DOWN AND QUIT: Trump Won’t Be Defeated By Media, Conservative Or Otherwise swears Emily Jashinsky at Da Fed.

Trump animates a sizable chunk of the Republican electorate. He still packs people into Rust Belt rallies like no Republican or politician can. But the political math seems increasingly dubious. Being loved by part of the base doesn’t work when many independents and moderate Republicans are so turned off they either stay home or vote for Democrats. 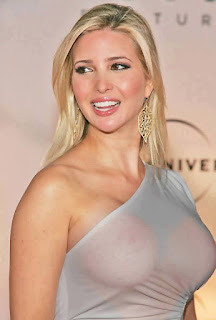 Beege Wellborn at Haut Hair says Insurrectiony Orange Man much badder: Trump talking points memo went out. "That didn’t take long." Well, they had lots of notice. Insty, HOW CAN WE MISS YOU, IF YOU WON’T GO AWAY? "Donald Trump announces his 2024 presidential campaign in a bid to seize early momentum." Bob Hoge at Red State, Trump Shocks the World—by Nearly Putting Us to Sleep. "Even the actual major announcement was delivered with a surprising lack of excitement, at least by Trump’s standards." Capt. Ed at Haut Hair reports Ivanka deserts, I'm out -- for good. Well, I'll miss her. Eddie Scarry at Da Fed, Corrupt Media Have Created A Hilarious Problem For Themselves In Time For Trump’s 2024 Campaign. "They’re going to talk about him. There’s no way they can’t. But how do they explain to their audiences that they’ve set up different rules and created separate editorial decisions specifically for one candidate?" Sen. elect J.D. Vance at Am Con, Don't Blame Trump. "Any midterm autopsy ought to focus on how to close the national money gap, and how to turn out less engaged voters." Vis the Wombat's In The Mailbox: 11.16.22, Auguste Meyrat at Da Fede asks Why Did Gen Z Turn Out To Vote For Democrats And Against Their Own Interests?. Too soon oldt, too late schmardt. Kurt Schlichter at Town Hall wants to know OK, Who Is Getting Fired? "The leadership had one job – win. It failed to win. Now it must pay." Matt Vespa at Town Hall on What Michelle Obama's 2016 Election Remarks Say About the Democrats. "Two things remain constant now regarding American elections post-2016. One, Democrats can never let Trump beating Hillary in a presidential contest go. And two, Maricopa County, Arizona, is just incompetent when it comes to counting the votes promptly." Steve McCann at Am Think thinks The 2022 Mid-Terms Exposed the Existence of Two Americas and the Overwhelming Importance of the 2024 Election. The next election is always the most important ever. Jazz Shaw at Haut Hair finds New York Democrats blame the NY Dem party for midterm losses.
Matt Margolis at PJ Media on how Joe Biden Just Proved He Fears Donald Trump's 2024 Candidacy "Before Trump’s announcement was even over, Joe Biden tweeted an attack ad against him, rehashing his usual anti-Trump talking points."

According to Eric Lendrum (again), Election Machines Report More Votes than Ballots in Two Virginia Swing Districts. Why is counting so hard for these people? From the Wombat's In The Mailbox: 11.16.22, The Geller Reports a Maricopa County Election Judge Says Voting Machines Were Programmed to Reject Ballots on Election Day. They worked fine the day before. Insty, TO ASK THE QUESTION IS TO ANSWER IT: Why Does ‘Election Denier’ Apply Only to 2020? Athena Thorne at PJ Media explains  The Rise of the Democrat Vote Machine (and How to Beat It). At CNN,  Georgia DA floats immunity deals for fake electors as investigation into Trump hits roadblock. Mia Cathel at Town Hall, Biden's DOJ Now Silent on Actual Voter Disenfranchisement, like what Katie Hobbs did to Republicans in Arizona.

Althouse,  "Trump Faces Five Major Investigations. He Has Dozens of Ways Out." "This is a brilliantly displayed series of flow charts, showing so many ways for Trump to win, as figured out by Ankush Khardori. (NYT link). It doesn't matter. The process is the punishment. Kevin Downey at PJ Media on a SHOCKER! WaPo Sheepishly Admits the FBI Found No Nuclear Secrets, or Anything Else, in Mar-a-Lago Raid. Just souvenirs.

CBS News@CBSNews "BREAKING: Former Vice President Mike Pence tells CBS News that he's "closing the door" on testifying before the Jan. 6 committee. “Congress has no right to my testimony,” he tells @margbrennan." I guess he really is running. Besides, the J6 Star Chamber is about to be disbanded. According to Bob Spencer at Front Page he still whines Trump’s Words on Jan. 6 ‘Endangered Me and My Family’ "When did Mike Pence morph into Mitt Romney?"
At CNSNews, FBI Director Won't Say If He Had 'Confidential Human Sources' 'Dressed as Trump Supporters' at Jan. 6 Insurrection. Of course he did. The FBI is evil, not stupid. At Da Wire, ‘It Should Be A No!’: Congressman Explodes After Wray Refuses Question On FBI, January 6. Charles Sullivan at Am Thinks lists Key Takeaways from the FBI Whistleblowers Report. Jazz Shaw, Judge won't allow Biden FBI obstruction on political basis

Officials in Louisiana and Missouri recently launched a lawsuit against the Biden administration seeking information about alleged collusion between the FBI, the DoJ, and other agencies with social media companies to censor information unflattering to the White House. Lawyers for the White House attempted to prevent some of the depositions from taking place, including that of FBI special agent Elvis Chan. Agent Chan had been identified as having worked directly with Meta to remove certain news stories on Facebook. But U.S. District Judge Terry Doughty of the U.S. District Court for the Western District of Louisiana shot down the request, allowing the depositions to go forward. Needless to say, there are probably some very nervous people biting their fingernails in the White House this week. (National Review)

Stacy McCain highlights the girlfriends role in the grown FTX scandal, The CEO Was a Tumblrina? How Did Somebody Overlook This Gigantic Red Flag in the FTX Catastrophe? "This operation had more red flags than a May Day parade in Beijing, but nobody seemed to notice any problems with FTX/Alameda when Bankman-Fried’s empire was the hottest firm in the hottest “emerging” sector of the economy." The right politicians were bought off. At Da Blaze, Here are some of the biggest FTX losers — along with its biggest Democrat beneficiaries.

So, apparently, my claim that the GOP had secured the house yesterday was premature by some lights. Later yesterday, another district fell for the GOP, the major networks got onboard, and Joe Biden admitted defeat. Althouse cites WaPoo, "Republicans narrowly win House, ending full Democratic control of Congress."