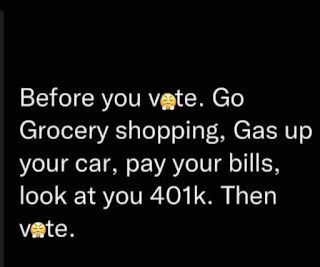 Opening with Stacy McCain, The ‘Blood Moon’ Eclipse and Other Cosmic Portents of a ‘Red Wave.’ "There will be a lunar eclipse in the pre-dawn hours Tuesday and, according to my source for all things space-related, John Hoge: “This is the first Election Day total eclipse in the history of the United States.” Make of this celestial omen what you will; my job is merely to report the facts, not to interpret the cosmic significance of such things." Stacey Lennox at PJ Media hopes Democrats Might Be Underestimating How Badly They Will Get Trounced on Tuesday. Me too.  Capt. Ed at Haut Hair VIP, Prediction time: Have "submerged voters" hidden the size of the Republicans' wave?. Why speculate? Pretty soon we'll know. Politico whines that the Specter of midterm wipeout threatens Dem plans to shake up presidential primaries. Salena Zito at Wa Ex examines How the Democrats lost their way
Not Bad, but needs more cowbell

At Front Page, Biden Warns of Threat to Democracy "Inflation, crime, and the open border don't really matter." At Am Spec, Rabbi Fischer asks Who Is the Real Threat to Democracy? Breitbart cites Jonathon Turley: Democrat, Media Rhetoric Proclaiming Societal Collapse if GOP Wins ‘Grotesque,’ ‘Borders on a Type of Defamation.’  Da Caller,  ‘Fool’s Gold’: Van Jones Said Democrats Foolishly Thought Talking About Threat To Democracy Would Work.  At the Victory Girls, Paladin’s AMERICAN GOMORRAH ™ — “VOTE DEM OR ELSE” Edition. James Antle at WaEx catches Biden in a new lie, White House says Biden 'comes from coal country' amid flap over energy comments.  Ace (ironically) notes The Red Wave Is Being Powered by White Supremacy, Especially the White Supremacy of Black and Hispanic Voters Voting GOP "The worst of all White Supremacies." From Twitchy, Jim Geraghty’s thread lays out how RAD it will be when GOP takes the House and Lefties can’t DEEEAL. David Strom at Haut Hair sees Ron Klain capitulate, "Only in a totally bizarro world would a person campaigning for his life ever brag that 12% of Americans believe they are better off, in a poll where nearly half the country says that they are personally worse off."

At I&I, Why Are Democrats Predicting An Economic Crash Next Year? So they can blame Republicans, of course. City Journal credits The Parents’ Revolt "Activists’ attempts to impose critical race theory and gender ideology in public education have sparked a nationwide backlash." At Am Great, the great Victor Davis Hanson blames The Pathetic Democratic Pantheon, "Joe Biden, Hillary Clinton, Barack Obama, and Nancy Pelosi are of no use to the Left in the midterms because it is their radical ideology that was finally enacted and wrecked the country."

Mary Chastain at LI polled the other LI authors Legal Insurrection Authors Predict the 2022 Elections. "How will it end? When will we know?" At WaPoo, Henry Olsen posts My predictions for the 2022 midterm elections. Senate 54-46 GOP, House 246-189. ET identifies the Top 36 House Seats That GOP Might Gain on Election Day. Spencer Brown at Town Hall sees Dems Prepare Their Excuses Before Tuesday's Shellacking. The usual, racism, voter suppression, misdismal information and of course, bad voting machines.

At Haut Hair, Oz odds for PA win hits peak at 59.4%. HE has their doubts, WATCH: John Fetterman Promises He Is 'Sit to Serve'. At PJ Media Matt Margolis wants you to WATCH: John Fetterman Declares 'I Celebrate the Demise of Roe v. Wade'. But since when does being a Senator require a fully functioning brain? Biden did it without one for years! At Town Hall, Working-Class Pennsylvanians: Here's Why We're Not Voting for Fetterman. It's cosplay. "He's faking it. John Fetterman has never had a real job in his life ever. Come out and work my job," Cathell challenged, railing against the "idiocy" of progressives portraying Fetterman as "the working man's candidate." Fetterman's well-to-do family has "spoon-fed him," he continued. "The Democrats are pushing this whole 'working man' crap. He's not the working man's guy." Fox, Pennsylvania Senate: Fetterman's camp sues over undated absentee ballots, "John Fetterman and his camp estimate thousands of ballots will not be counted because they are missing or have the wrong date." Hey, the stupid get to vote too! Breitbart touts the Final NH Senate  Poll: Gen. Bolduc Leads Democrat Maggie Hassan in New Hampshire. In the NC senate race, the Free Bacon reports Cheri Beasley Campaigns With D-List Dems as Party Gives Up on North Carolina, "Obama, Biden, Oprah nowhere to be seen as Republican Ted Budd widens lead in US Senate race". In Wisconsin, David Strom claims WaPo infantilizes voters, with  "specious charges of racism against Wisconsin senate candidate Ron Johnson."

Mary Chastain at LI, Politico Establishes the Groundwork for Democrats to Deny 2022 Election Results, “Thanks for inadvertently confirming 2020 was rigged.” Stacey Lennox at PJ Media, Democrats Are Losing, So Politico Is Very Worried About Election Integrity. NYT claims Russia Reactivates Its Trolls and Bots Ahead of Tuesday’s Midterms "Researchers have identified a series of Russian information operations to influence American elections and, perhaps, erode support for Ukraine." Why would we assume otherwise? On the other hand, this is based on one user on Gab. Jazz Shaw at Haut Hair, Pennsylvania mail ballots without dates won't be counted. But are we sure? At Am Con a canonical history of how Pennsylvania Courts Bungle Election Law

In this quagmire of still-unanswered questions, it is no wonder that last month Pennsylvania's acting secretary of State Leigh M. Chapman simply decided to count undated ballots in the upcoming midterm election. The election code says the envelopes must be dated, but doesn’t specifically say that those votes can’t be counted, and there was not yet any binding court precedent forcing the state not to count them.

This brings us back to the PA Supreme Court decision this past Tuesday. The Republican Party filed suit to stop Pennsylvania from counting the undated or misdated ballots. The opinion grants an injunction, ordering the ballots to be segregated and not counted. The opinion explicitly states that there is a split among the justices about whether not counting the ballots violates federal law. The late Chief Justice Max Baer, who passed away just a few weeks ago, would have likely been the fourth vote to allow the undated votes to be counted. Without him, the court was split and unable to issue a binding majority decision. The court order says that more detailed opinions on both sides of the argument will follow.

As I said above, this stops the counting of undated ballots, but I hesitate to call this a massive legal victory. The ballots will be segregated, and when there is a close election in Pennsylvania on November 8, a losing candidate (likely a Democrat) will file suit and attempt to count the segregated ballots that have not been counted.

And it must not stand. Catherine Engelbrecht and Gregg Phillips must be freed immediately, without being required to disclose the name of their confidential informant. The American people are watching Joe Biden’s Justice Department closely, and more and more people are realizing that there is a two-tier justice system: one to protect Leftists such as Hunter Biden and Hillary Clinton, no matter how serious their crimes may be, and another to persecute patriots who still believe in the promise our free republic offers. Attorney General Garland: End this injustice now. Free True the Vote.

Looking forward to 2024, Sundance reports  Tom Cotton Decides Against 2024 Presidential Campaign. I like him, but that's OK, I don't think he'd make it. At Am Think, Rajan Laad thinks (no not yet) Trump did not insult Ron DeSantis, it was merely a joke. Politics ain't cornhole.

FWIW, I voted early this morning, no lines.