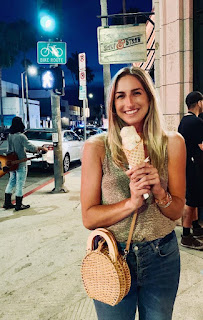 
This brings us to Salt and Straw. The Portland founder of the delightful ice cream shop often sees lines down the street. When Joe Biden came to town and got a Baskin-Robbins ice cream cone, Portland wags announced that he’d gone to the “wrong” ice cream store. He should have gone to Salt and Straw, of course!

The place has really grown. It’s branched out from its multiple locations in Portland to the trendiest locations in L.A., Eugene, Seattle, San Diego, Nancy Pelosi’s neighborhood in Pacific Heights, Silicon Valley, Anaheim, Sacramento, Orlando, and Miami. No wonder Duane “The Rock” Johnson wanted a piece of the business.

But unlike Portland leaders, business owners know that you’ve got to have firm fundamentals in place to thrive. And now, the ice cream moguls who run Salt and Straw say they can’t stay in Portland unless employees at the headquarters feel safe. If you’re at all unclear, besides pubic solvency, public safety is a city’s number one fundamental task. Portland has failed spectacularly.

Portland Mayor Ted Wheeler has protested with Antifa and BLM rioters, blamed police for the wrongs committed by coddled anarchists, and done nothing until recently about the drugged-out bums lining Portland’s sidewalks and living in tents and run-down RVs along its roads. Wheeler has turned the City of Roses into a portrait of dystopia. The state has given its blessing to the right to keep “personal use” amounts of hard drugs, the city is a sanctuary city for illegal aliens, and the immigration facility is a frequent target of Antifa arsonists.

Wheeler and his Leftist cohorts have condemned ICE and thrown their lot in with the anarchists.

And now Salt and Straw has noticed.

The co-founder of the business, Kim Malek, told The Oregonian that “if we can’t make it safe, I can’t stay here. It’s just not responsible of me to put my team in that position.”

The paper reported that this week “a fire in an RV parked at Southeast 3rd Avenue and Ash Street near the company’s headquarters and kitchen shut down power to Salt & Straw and several other businesses after the blaze brought down a transformer.” A fire in an RV parked randomly in Portland and likely filled with addicted drug cookers.

At PM, Multnomah County sees only 46% of misdemeanor, retail theft cases prosecuted in 2022

A new report has revealed that Multnomah County District Attorney Mike Schmidt is prosecuting less than half of all misdemeanor theft cases referred to his office by police.

According to KGW, thieves regularly steal armloads of merchandise and walk right out the front door with no fear of repercussions. The ongoing retail theft has driven some stores to close and reduce their hours.

Schmidt is also prosecuting fewer second- and third-degree theft cases than his predecessor Rod Underhill who in the first nine months of 2019, prosecuted 60 percent of misdemeanor theft cases, compared to Schmidt's meager 46 percent.

The situation is made exponentially worse by the fact Portland police lack resources to follow up on investigations and property crimes such as shoplifting are rarely solved by police.

Parents in Oregon's North Clackamas School District are outraged over a board's decision to go virtual amid community outrage over LGBTQ+ content taught in area schools and substandard academic performance indicated by a Department of Education report.

The board's move follows an October meeting in which parents complained about the curriculum and argued that the district is working to keep parents in the dark, according to KATV in Arkansas.

"This district and the way it runs is a complete dumpster fire," one father said during the meeting, according to the outlet. "Stop gaslighting us in your little newsletters saying everything is okay."

Another father told the board that "school choice and privatization of education" are coming while others slammed the board for allegedly sowing the seeds of division among students.

Among the key arguments parents made in pushing back against LGBTQ+ content in the district's schools were that this content focused on teaching about "gender-affirming care" or encouraged "pornographic" books offered in school libraries, according to KATV.

Parents claimed their voices are being stifled by the district and the virtual shift is only the school board's latest effort to make sure their concerns are not being heard.

One mother, who identifies as a member of the LGBTQ+ community, according to KATV, voiced outrage with content in area schools as well, saying, "It isn't homophobic or transphobic to believe that children should not be sexualized or mutilated under the guise of the LGBT umbrella."

"It is, however, homophobic, transphobic and incredibly harmful to our community to presume all gay and trans people support that because the majority of us do not," she added.

Good for them. Now, if they would only learn to vote better.

The Wombat has Late Night With Rule 5 Sunday: World Cup Edition waiting at The Other McCain.