Richmond Times-Dispatch, State proposes limits on menhaden fishing in the Bay after spills

The Virginia Marine Resources Commission is considering new limits on the controversial menhaden fishery after two spills of dead fish fouled Eastern Shore beaches in July and sparked calls for an outright ban.

The Reedville-based fleet operated by Omega Protein spilled 4,895 menhaden on Silver Beach over the July 4 weekend and an estimated 10,000 menhaden and 26 red drum on July 25, which forced the closing of Kiptopeke State Park beach for a time when some of them washed ashore.

The first spill came when a “purse seine” net tore, as Omega crew members were gathering a school of fish. Purse seining involves surrounding a school of fish with a net maneuvered by two boats, which then bring the closed “purse” alongside a larger vessel which vacuums the fish into its hold.

The second spill came with the captain of one of the larger vessels spotted several large red drum in the net, and dumped all the fish hoping that would keep at least some of the drum alive.

In response to this year's spills, the commission is considering barring purse-seining within a mile of the mean low tide line.

That should keep operations in deeper water, reducing the possibility of a net tear and make it less likely that any dead fish from a spill would drift ashore, a commission briefing paper said. 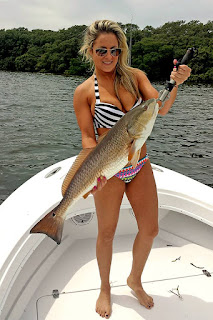 Well, it was noble of the Capt to try to save the big Red Drum (which often hang around the big schools of Menhaden), but likely futile. Bycatch is a natural consequence of big netting operations

The commission also is proposing a half mile buffer zone on either side of the Chesapeake Bay Bridge Tunnel, a hot spot for fishing that also crosses the main channels to the port and Navy facilities in Hampton Roads as well as to the port of Baltimore.
. . .
Finally, the commission proposed holiday bans, to make sure spills don’t close beaches when most vacationers want to enjoy them.

Those would run from two days before the Memorial Day and Labor Day weekend and through Memorial and Labor Days, as well as from July 1 to July 7.

It's better than nothing, but not as good a complete ban on the reduction fishery in Chesapeake Bay

The Wombat has Rule 5 Monday: HMS Foxhound/HMCS Qu’Appelle out on time and under budget at The Other McCain.