Pelosi Steps Down, Trump STILL In, GOP STILL has House

After the GOP finally crawled across the lines with enough seats to claim the House, Nancy exectured her exit strategy, announcing that she will not seek a leadership role this term, although she will still occupy a seat (at least until appointed ambassador to Italy). Chris Queen at PJ Media, Nancy Pelosi Announces Her Future in Politics. Capt. Ed at Haut Hair Reports Pelosi to retire from House leadership -- but remain in Congress? Update: Confirmed: Backbencher in name only; Update: Hoyer too. Ace, Nancy Pelosi Will Finally Relinquish the Speaker's Gavel From Her Twisted Claws, "Our long national nightmare has almost ended." Althouse notices Nancy Pelosi uses sexist analogy to describe her withdrawal from power: "I have no intention of being the mother-in-law in the kitchen saying, 'My son doesn’t like this thing this way.'" "That was completely gratuitous — dragging in the stock character, the mother-in-law. We're supposed to know the stereotype and to loathe that sort of woman."

Still mulling over Trump's announced 2024 run. FWIW, I'm open to other candidates. At City Journal, Trump’s Uphill Sequel, "The former president’s 2024 candidacy faces challenges not only from within his own party but also from an altered political environment." Tristan Justice at Da Fed, Donald Trump Is Running For President Again. Washington Would Be Wise To Remember 2016. At Insty, #JOURNALISM: "It’s always been that way. Trump is treated as a criminal just for existing. Weirdly everyone was fine with him until he was a political threat to Democrats." David Strom at Haut Hair questions Trump's Achilles' heel? WuFlu? I disagree. Da Wire announces Two GOP Megadonors, Both Trump Allies, Announce They Will Not Support His 2024 Presidential Campaign. At Am Think, Laura J. Wellington thinks Trump defies the odds. At Am Spec Dan Flynn is Neither Trump Nor Never Trumpers. "With his ill-timed presidential bid announcement, the Donald again puts his ego over conservatives’ ideas and interests." Insty, SADLY, THIS IS A GOOD POINT: Eric July@EricDJuly "A negative thing about Trump running again is the leftist publications and studios that were on life support just got their bogeyman (and source of income) back." At TNP, Raheem Kassam just says Yes.

From the Wombat's In The Mailbox: 11.17.22, The Federalist: Here’s How Democrats Broke Congress And How Republicans Can Fix It, Kevin McCarthy Should Follow Through On His Promise To Kick Dems Off Congressional Committees, Senate Republicans Keep Showing Us Why They Never Deserved A Majority,

From the Wombat's In The Mailbox: 11.17.22,  Sebastian Gorka (Mr. Pain Relief factor)  on The Fake Trump-DeSantis War and the 2022 Non-Election. Ace, Liberal RINO Corporate Gimp Asa Hutchinson Threatens Delusionary Vanity Run for President; Reached for Comment, "Beto" O'Rourke Says, "That Limpdick? LOL Get F***ed" Plus: Shut the Fuck Up, National Review. "What, was there no Walmart board seat available?"

Jazz Shaw at Haut Hair is upbeat, Yes, the GOP took the House and it's still kind of a big effing deal. Matt Margolis at PJ Media hears the Liberal Media FINALLY Make a Painful Admission About the Midterms. We won. The great VDH at Am Great, Let The Blame Games Begin? "For Republicans either different leaders or different strategies—or both—are needed to ensure different results." Micah Meadowcroft at Am Con reminds us Our Task Hasn't Changed, "This time gives us the opportunity to step back. 'Anony Mee' at Am Think advises Patience, Grasshopper; Tsunamis Take Time. Vince at Flopping Aces worries that Democrats Brought a Gun to the Election Knife Fight While the GOP was Busy Deciding Which Loafers to Wear… At RCP, Peder Zane comments Democrats Never Admit Defeat. Yuval Levin at NYT (cited at Haut Hair), Democrats lost the 2020-rerun midterms too. Nick Arama, at Red State reports that already the GOP Comes Through on Important Promise, Opens Investigation Into Joe Biden. Matt Margolis, House GOP Drops Bombshell Allegations About Biden Crime Family. The Free Bacon want you to Meet the Democratic Grifters Who Profited From the 2022 Midterms.

Nicole Silvero at Da Caller finds Warnock Dodges Question About ‘Mold And Corpses’ At Church-Owned Columbia Tower Apartment Complex At Front Page, You Think Fetterman Is Bad? Wait Until You See Who ELSE Pennsylvania Elected. "When John Fetterman looks like a picture of eloquence and energy by comparison" to the dead guy. Breitbart finds a John Fetterman Adviser who Admits Senator Will Not Be Able to Answer Questions in Usual Way, brain-damaged. Sarah Weaver at Da Caller, ‘Still In The Fight’: Kari Lake Refuses To Concede After Projectors Call Gov Race For Dem Katie Hobbs. I hope she prevails, but she probably won't. There was definitely Republican voter suppression in Maricopa County. Under the Hobbs administration of the election there weren't enough paper ballots in areas expected to vote Republican. It could be a coincidence. KT at Haut Hair, Warnock: Walker "crossed a line" when he spoke about Warnock's kids. It's not like Walkers reproductive output has not been an issue. Matt Margolis again with Four Developments That Waited Until After the Midterms:  Newsom’s budget deficit, Rudy Giuliani cleared, New York City crime and Biden’s student loan forgiveness killed. 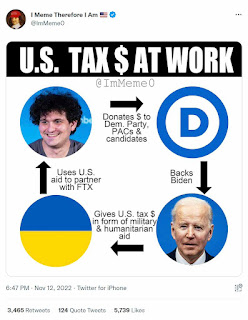 Shot: “Nine years ago, when crypto-fraudster [Sam Bankman-Fried] was 19, his mother, a Stanford professor, wrote a very long article making the case that free will is a myth and that we should not blame people for committing crimes.” — Michael Shellenberger, yesterday.

and FTX HAD ‘COMPLETE FAILURE OF CORPORATE CONTROLS,’ NEW CEO SAYS. "Related: Singapore writes down $275 million in FTX, calls belief in Sam Bankman-Fried ‘misplaced.’ “In a statement on Thursday, state-owned investment company Temasek said it had decided to write down the value of its full investment in the exchange to zero, ‘irrespective of the outcome of FTX’s bankruptcy protection filing.’”" and QUESTION ASKED AND ANSWERED: Could Sam Bankman-Fried go to prison for the FTX disaster? Althouse is curious  yellow, "When I first started my foray into poly, I thought of it as a radical break from my trad past... But tbh I’ve come to decide the only acceptable style of poly is best characterized as..."

"... something like 'imperial Chinese harem'... None of this non-hierarchical bulls–t; everyone should have a ranking of their partners, people should know where they fall on the ranking, and there should be vicious power struggles for the higher ranks.... I’m less hedonistic and more masochistic. I get a lot of pleasure from doing things that are hard, unpleasant, physically taxing, or emotionally painful..."

From the Free Bacon,  Pennsylvania AG Josh Shapiro Charges His Own Former Campaign Consultant with ‘Wide Scale’ Voter Fraud. "Pennsylvania's governor-elect rose to prominence by downplaying Republican fears of voter fraud." Ace, After An Election In Which He Claimed That Anyone Who Discussed Voter Fraud Was an "Election Denier" and Threat to Democracy, Incoming Pennsylvania Governor Josh Shapiro Brings Charges Against Democrat "Campaign Consultant" for Massive Voter Fraud "So many post-election news dumps! Gee, I wonder why he didn't bring these charges sooner." At JTN, Natalia Mittelstadt reports Virginia county acknowledges, explains mismatches in vote totals at precincts ""The only explanation is that generally hand counts are not very reliable," said Eric Olsen, Director of Elections/General Registrar at Prince William County." KT at Haut Hair, Governor Kemp testifies before the Georgia grand jury, Flynn ordered to appear. Lawfare.

'Streiff' at Red State takes notice that The Verdict Is in on the ‘Top Secret’ Documents Seized by the FBI From President Trump’s Home "Federal agents and prosecutors have come to believe former president Donald Trump’s motive for allegedly taking and keeping classified documents was largely his ego and a desire to hold on to the materials as trophies or mementos, according to people familiar with the matter."

Let’s be serious. The odds of anyone in the FBI, the Department of Justice, or the Office of the Archivist of the United States thinking that President Trump had actual classified documents, much less the identities of covert agents or nuclear weapons codes in his possession, are zero. Sane people don’t believe crap like that. That is jerk-off material for progressive Twitter. The entire purpose of the FBI raid was to attempt to intimidate President Trump as he hinted at a 2024 presidential run in the same way Department of Justice investigations are being used to harass and, in the case of Steve Bannon (Steve Bannon’s Conviction Shows the Biden Justice Department Has Politically Weaponized the Law and Law Enforcement), imprison Trump allies. They also wanted to create a narrative of Trump-is-a-traitor that could be weaponized to offset any campaigning done by Trump in the midterms. Finally, if possible, they wanted to damage him should he opt to run for president. There was never any crime. All that ever existed was a desire for petty vengeance. And that is not going to work out for them the way they thought it would (The Political Persecution of President Trump Is Not Going to Make Trump or His Supporters Go Away or Accept the Outcome).

Straight Arrow News  Never mind. No Trump business documents found in Mar-a-Lago.  From the Wombat's In The Mailbox: 11.17.22,  EBL , Confirmed – The Mar-A-Lago Raid Was A Politically Motivated Witch Hunt.  Also The Geller Reports  Pennsylvania Democrat Political Consultant Arrested For Massive Ballot Fraud, and House GOP Launches Far-Reaching Investigation Into Biden Including Human Trafficking and Fraud   At Twitchy, a KICK-A*S thread points out ‘yesterday’s conspiracy theories’ that were TRUE all along (and boom). Leah Barkoukis at Town Hall sees It Sure Looks Like Schumer Just Confirmed a 'Far Right Conspiracy Theory', "Great Replacement Theory."

At Haut Hair, KT finds Pence blasts J6 committee, refuses to testify and Liz Cheney has thoughts. Who cares what she thinks? NewsBusters ABSURD: CNN's Michael Fanone Labels Mike Pence 'A Coward'. Betsy McCaughey at NYPo thinks The Jan. 6 Committee should do its whole job and look at the govt plans. That ship has sailed. Jazz Shaw reports on a Texas J6 man convicted of "wearing military gear"

As with so many of the other rioters we’ve seen being rushed through the courts, both prosecutors and the media seemed hard-pressed to come up with any specifics as to what Brock did on that day to warrant a conviction in federal court that will very likely result in a lengthy prison sentence. The one thing everyone seemed to agree on was that Brock was “guilty” of wearing “military gear” (a tactical vest and a helmet) which is now apparently either a crime or indicative of criminal activity somehow.

At Front Page, NBC News Must Reveal Their Source in the Paul Pelosi Debacle "If there are no repercussions for lying, we'll continue to be fed lies." Horse, barn door.