And other political amusements. 'Adam Mill' at Am Great explains Why Anti-Trump Zealots Might Help Trump Win the Primaries. Because it worked out so well in 2016. Also at Am Great the great VDH makes a comparison, Was Trump Our Captain Queeg? "And will the NeverTrumpers finally be exposed to have been as contemptible as the NeverQueegers were in The Caine Mutiny?" Vince Coyner at Am Think thinks Donald Trump 2022 was Forged in a Crucible of White Hot Fire "From the second he announced, Trump found himself enduring a withering barrage of vitriol and venom unseen in American politics. The abuse came from Democrats, the media, social media, and academia as well as the GOP establishment. What Trump endured was relentless. Yet somehow, he won." At Fox, Trump deems Kanye West a ‘seriously troubled man’ who 'just happens to be Black' after Mar-a-Lago trip fallout. A valuable lesson on why you don't invite crazy to dinner. At LI Stacey Matthews is disgusted when the NY Times Predictably Tries to Drag Ron DeSantis Into Trump/Kanye/Fuentes Dinner Controversy. "So DeSantis is now on the hook to respond every time a Republican in his state behaves badly at dinnertime? If so, that’s a standard that needs to be applied across the board." Just Mindy@just_mindy "Ron DeSantis is responsible for every dinner meeting that happens in the state where he is Governor. Can’t wait until we apply this standard to Gavin Newsom." At Compact, Daniel McCarthy touts DeSantis the Realist. 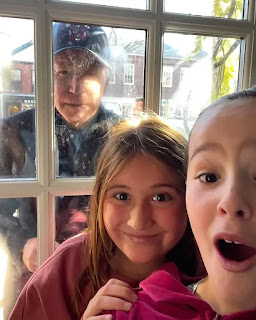 At NYPo,   ‘Creepy’ Joe Biden roasted for strange selfies. A least he can't sniff their hair through glass windows.

Stephen Kruiser at PJ Media fears Republicans Might Make House Takeover the Wrong Kind of Interesting with a fight over the speakership. I'm not in love with McCarthy, but I don't know who would be better. On the Democrat side, Matt Margolis at PJ reports an Election Denier Refuses to Give Up House Leadership Position (Clyburn).

At the NH Union Leader, cited at Haut Hair, Patrick Hynes notes Dems reclaim election denier mantle from Trump. "Not two weeks after the Democrats ran a national campaign saying that “our democracy is on the ballot,” New Hampshire Democrats sued the Secretary of State to stop counting ballots and disenfranchise voters." At Da Caller, Former Rep. Jason Lewis looks at How The Census Saved The Democrats. By overcounting blue states and undercounting red states, they likely added more than one district to the Democrats tally. Accident? Maybe, but there's no reason to trust them after the federal bureaucracy went resistance against Trump. At HE, Roger Stone looks at The Hispanic Shift To The GOP– And Why Democrats Should Be Terrified.

AP whines Lake seeks election records in suit against Arizona county. WaPoo smugly asserts Maricopa County says printer glitches didn’t prevent anyone from voting. "A report to the Arizona attorney general’s office blames Republicans for stoking doubts about a secure alternative available to voters." Of course they'd say that; they can't take any blame when 40% of the machines suddenly don't work right on election day. At Am Spec, Tom Raabe looks at Arizona’s Election Bungle. "Once again, the Grand Canyon State is in the headlines for all the wrong reasons." At Am Think Jack Gleason thinks about The Uniparty, FTX, and Electoral Fraud. "We have just experienced the second great election steal in two years. Will the Uni-Party of Democrats and RINOs succeed in evaporating the Red Wave?"

Also at Am Think, Brian C. Joondeph says Don’t Shut Down the January 6 Committee – Supercharge It! "A better idea would be to renew the committee and stack it with Freedom Caucus Republicans and a few “Never-Biden” Democrats, if any exist. Names like Reps Jim Jordan, Andy Biggs, Matt Gaetz, Marjorie Taylor Greene, and Chip Roy come to mind." Atop Da Hill, Schiff pushes back on reported tension between Cheney, Jan. 6 panel staffers "“No, I mean at least I certainly hope not,” Schiff told co-anchor Dana Bash on CNN’s “State of the Union” when asked if the story was true." At Da Caller, Schiff Says He’ll Have To ‘Consider The Validity’ Of GOP Subpoena, "We’ll have to look at the legitimacy or lack of legitimacy of what they do.” I'm sure his idea of "legitimacy" depends on whether or not it hurts Democrats.

ET reports House Judiciary Republicans claim the FBI Waited Over a Year to Fully Investigate Jan. 6 Pipe Bombs. "According to the whistleblower, it was not until Feb. 7, 2022—more than a month and a year after the incident—that the Washington Field Office of the FBI asked its national field offices to investigate and try to identify the man." Don't turn on the lights 'cause we don't want to see!

Did Clinesmith act alone in formulating his lies? Was he ordered to lie? Was his lie part of any broader pattern of lies on later FISA applications? Who worked with Clinesmith to create the FISA application and when was the lie incorporated? How many people above Clinesmith (McCabe, Comey, et al.) knew about the lie and played along? How far up the FBI chain did they know it was all constructed, that Page was a stooge alright, but one clearly documented as working for the American side? Durham never seemed to ask, and we the public may never know.

Durham never pursued the Joffe line. Who paid him? When did he start monitoring the Oval Office? What did he learn? When did he stop? Was any of the monitoring, likely unconstitutionally, shared with the FBI? Was the FBI aware of the action and what, if anything, did they do to support it, profit from it, or try and limit it? Were Georgia Tech researchers culpable?

Left answered: exactly when did the FBI learn Steele's near-only source was bogus? When did they learn Dolan was the originator of the pee tape? Why did they not conclude the investigation at that point? How high up the FBI chain of command did knowledge of the lackadaisical sourcing by Steele go? Director Comey? If not, why not? Is this why Comey was fired by Trump? The FBI was actively investigating the President of the United States as a Russian spy and Comey was not aware of the details?

Why didn't Durham walk his indictments up the ladder? Or instead, why did he not proceed sideways, leaving Hillary but moving deeper into the FBI? Why not see if Fiona Hill at Brookings connects the failed Russiagate coup with the failed Ukrainegate impeachment, both of which she played a pivotal behind-the-scenes role in? Why didn't Durham use the stage of congressional hearings to bypass Joe Biden’s Justice Department and throw the real decision making back to the voters?

An unspoken part of Durham's charge from Barr was to protect his beloved DOJ to the greatest extent possible. Fox, henhouse.