Insider, Tippity Wichity, a private island in a sheltered cove near the Chesapeake Bay, is on the market for $2.1 million.

Down river from the Chesapeake Bay lies a 5-acre landmass known as Tippity Wichity Island, just a 90-minute drive from Washington, DC.

It recently hit the market with Sotheby's for $2.1 million.

Current owners Gail and John Harmon, a couple in their late seventies, bought the island in the 1970s after seeing a small ad for it in The Washingtonian, a local paper. Gail, a retired lawyer, told Insider they were on the hunt for a vacation home by the water when they moved to Washington, DC, for a military commitment John had at the time. 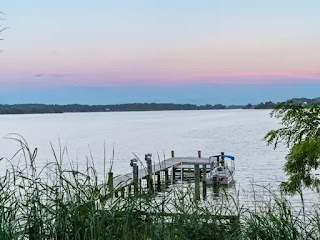 That's when a listing for the Tippity Wichity listing caught her eye, which she said included a quote from William Shakespeare's play, "Richard II," that read: "This other Eden, demi-paradise, This fortress built by Nature for herself."

Records show that one of the first residents of Tippity Wichity Island was a soldier by the name of Captain Henry Howgate, the Sotheby's listing states. And depending on what you believe, it adds, Howgate was either a confederate or union soldier, who purchased the island in 1879 after the civil war.

Regardless of the side he was on, Gail believes he was up to no good on the island. "It's a house of ill repute," she said.

An article published in 1895 by The News, a publication from Maryland, reported that a person by the name of Captain Henry Howgate was later convicted for forgery and embezzlement. It's unclear if he was the same Howgate to have once owned Tippity Wichity. 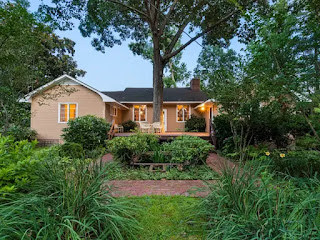 While passing Tippity Wichity Island on a Potomac River cruise in 2017, Jody Argo Schroath reported in Chesapeake Bay Magazine that some locals believe the name suggests a bordello was built on the island after the civil war.

Schroath wrote that it's "a corruption of the name 'Tippling and Witchery Island,' named for a house of ill-repute located there following the Civil War."

David DeSantis, the broker in charge of the listing, told Insider it's not hard to believe the "debaucherous" stories told about the island's history. "Washington, DC, was still a small outpost in the 1800s," he said. "It was the wilderness. There was a lot of piracy on the water, it was sort of a lawless environment."

The island does have what appears to be a very nice three bedroom house on it. But how about access?

According to Gail, the island is a mere five-minute boat ride from a jetty on the mainland. It's so close, in fact, that she said her son and his friend once swam it when they were kids.

The proximity to shore and the fact that the island is equipped with a functional electric system and a backup generator means that it could be used as a full-time residence, DeSantis said.

"There is no reason why, if you didn't mind the inconvenience of having to get into a boat every day if you wanted to go somewhere," he added.

The cove it's located is pretty well sheltered in the back of the St. Mary's River, but in winter, that 5 minute commute in a motor boat could be kind of obnoxious.  Still, for the right kind of family it looks pretty interesting.