We Got Them Special Counsel Blues Again, Twitter Unbans Trump

While obviously an act of political cynicism, the significance of this appointment should not be underestimated. I assume that Smith will be able to bring criminal charges against Trump in Washington, D.C., and it is almost a foregone conclusion that Trump will be convicted (of whatever the charges may be) by a hyperpartisan D.C. jury. In 2024, will Trump be the Republican nominee for president, or will he be trying to fight off a prison sentence? Or both?

More news from Dept. of Injustice, Sundance at CTH, Senator Rand Paul Questions FBI Director Chris Wray on the Construct of the Domestic Surveillance State. The Tampa Freep, FBI Director Wray Admits Says  70 Percent Of Threats In Abortion Debate Are Aimed At Pro-Life Activists. But no arrests. At Rolling Stone, DOJ Investigated Journalists for Insider Trading, Stalking … and Worse "The Department of Justice says it is no longer treating acts of journalism as crimes, but insists it is probing some alarming crimes potentially committed by journalists." 'Bonchie' at Red State wonders Why Did the DOJ Lie About the Paul Pelosi Attack? Second nature?

Please support our Capitol Police and Law Enforcement. They are truly on the side of our Country. Stay peaceful! 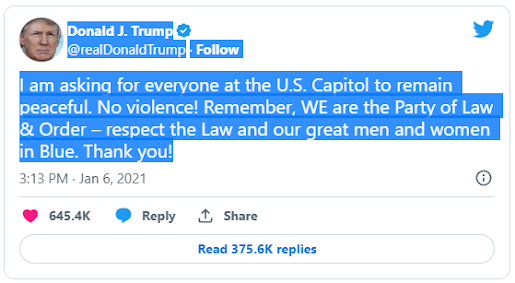 Thanks Elon, as ABC whines Trump’s Twitter account restored by Musk and NYT (cited at Haut Hair) moans Musk: He's baaaaa-aaaaaaaaack. Spencer Brown at Town Hall, Elon Musk Announces Trump's Twitter Fate.
Jazz Shaw at Haut Hair reports on how a Ohio J6 man gets three years after stealing a coat rack (and a bottle of booze) at the Capital. Meanwhile, John Sexton at Haut Hair reports that the Molotov lawyer who hoped to 'burn everything down' gets 15 months. Jonathon Turley, “Lost…in the Emotion of the Night”: Attorney Who Firebombed Police Vehicle Given 15 Month Sentence

"U.S. District Judge Brian Cogan praised Rahman for her commitment to fighting social injustices: “You’re a remarkable person who did a terrible thing on one night.” Cogan, however, also criticized her “arrogance” displayed in such conduct. Firebombing seems a tad more than arrogance when you throw Molotov cocktails at police cars.

Now we know what the DOJ thinks about. NYPo reports  Jan. 6 panel creates subcommittee to handle ‘outstanding issues’ like their failure to accomplish anything? “We’re looking at criminal and civil referrals for people who have broken the law and may have escaped scrutiny,” mostly Republican lawmakers who refused their subpoenas.

On every subject, confusion abounds, and it’s only getting worse. On the campaign trail, he forgot the name of the governor of New Mexico. (She does have three names). He lauded Oregon Sen. Ron Wyden, then seconds later couldn’t recall his name and instead described Wyden as “that other guy that I just talked about.” He talked about his visit to Florida in the aftermath of “Hurricane Ivan.” He wished a speedy recovery to Nancy Pelosi’s husband “Bobby.” (His name is Paul.)

At age 80, Biden is unable to read the simplest words off the Teleprompter. The word “ban” comes out as “blan.” He tries to urge people to vote, but instead says “veto.” Inflation is rendered as “implation.” The Obergefell decision by the Supreme Court (gay marriage) comes out as “Ogilfry.” 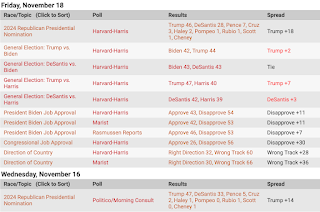 Radar on Line, 'Furious' Donald Trump Bans Dr. Oz From 2024 Presidential Bid, Rages Against TV Quack Who Lost To 'Shrek-Like' Monster. He has a point. Rick Moran at PJ Media thinks There Will Be Blood: GOP Civil War Just Getting Started. Sometimes it's necessary. Liberty and Prosperity wonders Will this be a one-and-done GOP majority? Seems to have been more of a remission, Althouse, Election Day cured me of my habit of checking Real Clear Politics for the latest polls, but I did just now check back... ... and look at this: -> "Hmm. I was just noticing someone on Twitter asserting that none of the polls put Trump ahead of DeSantis. They need to look again."

At NewsBusters HUH? MSNBC Declares DeSantis Won Due To Gerrymandering. That's not how any of this works in a statewide election. At ET, Walker, Warnock Won’t Debate for Runoff; Judge Extends Early Voting. KT, Georgia judge hands Warnock, Georgia Democrats a victory on early voting rules. Hey, it takes time to manufacture the necessary votes. At Gateway, Poll Pads Caught Adding *Hundreds* of Voters in Real Time as Poll is Being Closed. From Slay, Democrat Operative Arrested for ‘Widespread’ Voter Fraud in Pennsylvania. What? You can't trust the votes from Pennsylvania? "However, many are now questioning why Shapiro, a Democrat, waited until after the 2022 midterms to arrest Crews for the 2019 crimes. Due to the charges being filed on November 15, it’s unclear whether Crews was free to run his voter fraud scheme during the midterms or other elections." Also, FTX CEO Donated $300K to Members of Committee Investigating Him. But I'm sure they won't be influenced. At Breitbart, a report that Google’s YouTube Allows Dems to Question Elections, Not Republicans. Because, reasons!