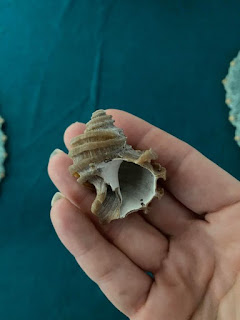 A Beachcomber’s View: The Unusual and Extinct Ecphora Shell

In September I was in Norfolk, Virginia, and had the opportunity to beachcomb along the shores of the Chesapeake Bay. By sheer coincidence, I was able to beachcomb on the Bay during a new moon, which is significant to a beachcomber because of the effects the moon can have on the tidal heights, which impact the shells that wash up on the shoreline.

For a beachcomber, the tide is everything. Full moons and new moons can affect the height of the tide lines greatly, but the new moon often gets overlooked because it isn’t visible like the full moon. A new moon is when the moon is located between the sun and the earth, which makes the moon seem invisible to us earthlings. The crescent moon or the fingernail moon is what appears in the sky before and after the new moon phase. During a new or full moon phase, the gravitational pull of the moon has a stronger effect on the oceans, making the tide lines higher and lower than normal. The extreme impact that the moon has on the height of the tide during these phases means a greater chance of finding something unexpected.

Whenever I go beachcombing, no matter if it’s for 10 minutes or two hours, I always take a bag for trash. I also make sure I take a reusable bag because, one – they are reusable, and two – they are easy to clean. My trash collecting led me in a direction I don’t typically go, but I don’t ignore trash on the beach, and on this day, it led me to a glorious treasure.

I was only able to walk the shoreline for a short bit of time, and during my initial search of the beach, I noticed right away that there were not a lot of shell pits or a thick debris line to look through, but I did notice how extremely low the tide was.

There were several pipes exposed that seemed to have been buried for quite some time, and that’s where I found it: Laying in between two of these huge pipes, all alone, was this one seashell, a shell that I had never seen before.

Since I had never seen this shell before, I had a hard time figuring out what it was, but talking to someone at work gave me the idea to use Google Lens for help. I took a picture of the shell and Google Lens used the image to search the internet for similar images, and the result was astonishing.

I had found an Ecphora seashell.

This magnificent shell isn’t the prettiest in color, as it is a dull, pastel taupe brown, and it certainly isn’t the biggest in my collection, measuring a mere 2″ inches, but I can safely say it is the oldest one I have ever discovered.

The Ecphora is an extinct gastropod, and since this one was found on the Chesapeake Bay in Norfolk, my best guess is that it is an Ecphora quadricostata species that lived during the Pliocene epoch, which ranges from 5.333 million to 2.58 million years ago.

The raised ridges along its body give it a very distinct look, which reminds me of one of my favorite shells, the Imperial Venus Clam, which also has ridges like the Ecphora shell, but a clam is a bivalve and an Ecphora is a gastropod.

During my research of this amazing specimen, I learned that the Paleontological Research Institute (PRI) uses the image of this beautiful shell as its logo. It was originally adopted by the founder of the Institute in 1932, and it has been the official image of their seal ever since. They also have an excellent article on the history of this shell on their website.

I believe I have mentioned before that the Ecphora is Maryland's State Fossil. They are pretty common in the cliffs at Matoaka Cottages. The best place to look is in relatively fresh falls from the cliff. The Ecphoras are usually full of mud, and survive the falls OK, but they are fragile enough that even our light surf breaks them up easily and small bits of the brown shell are common in the shell hash along the surf, and polish nicely to a nice amber color. Intact ones are very rare, usually some part of the tip, and maybe the lower sections are missing, even in specimens fresh out of the cliff. We collect a fair number along the way. Here is a shot of the Ecphora pile in our fossil case: 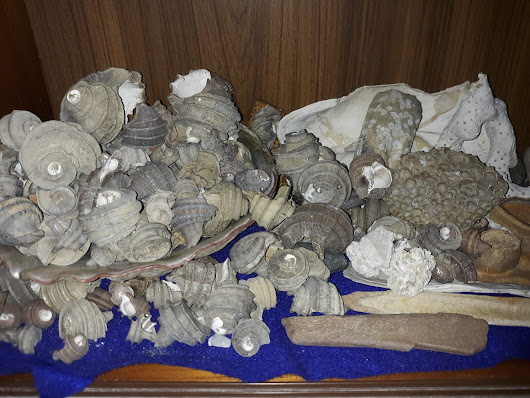