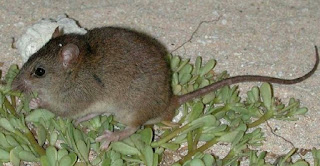 From the boys down under, 'Our little brown rat': first climate change-caused mammal extinction

The Morrison government has formally recognised the extinction of a tiny island rodent, the Bramble Cay melomys - the first known demise of a mammal because of human-induced climate change.

The changed status of the Melomys rubicola from the government's "endangered" to "extinct" category was included without fanfare in a statement released by federal Environment Minister Melissa Price late on Monday.

Geoff Richardson, an environment department official, told Senate estimates on Monday night that research efforts since 2014 - "including a pretty rushed trip in 2015" - had failed to identify any melomys individuals in their only known location on Bramble Cay, a tiny Torres Strait island near Papua New Guinea .


Declaring its extinction "was not a decision to take lightly," Mr Richardson said. "There's always a delay while the evidence is gathered to be absolutely certain."


The federal extinction listing comes almost three years after the Queensland government reached a similar conclusion, with a finding that the demise of the melomys "probably represents the first recorded mammalian extinction due to anthropogenic climate change".


The limited range of the animal, living on a five-hectare island less than three metres high, left it vulnerable to climate change. However, its 2008 "recovery plan", drawn up when numbers were likely down to just dozens of individuals, downplayed the risks.

"[T]he likely consequences of climate change, including sea-level rise and increase in the frequency and intensity of tropical storms, are unlikely to have any major impact on the survival of the Bramble Cay melomys in the life of this plan," the five-year scheme stated.
. . .
The federal policy director for the Wilderness Society, Tim Beshara, said preparation for the plan was limited, and it was never reviewed at its completion in 2013.

The little brown mouse (it's more a mouse than a rat) chose a very poor place to live for the long term. For a burrow dwelling creature to live on a small, low lying island in tropical storm beset regions just seems like a bad choice.  However, despite constant whining, there is no evidence for an increase in frequency or strength of tropical storms, and islands like Bramble Cay can grow upwards to meet sea level rise. 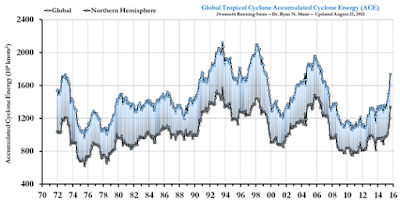 Incidentally, according to Wikipedia, the Bramble Cay rat is closely related to the Cape York melomys "except that it had some protein differences and a coarser tail caused by elevated scales." They are, or were,  quite likely sibling species, with the Bramble Cay rat evolving after a few Cape York rats happened to get stranded on Bramble Cay.

I would be remiss if I didn't point out that, at least occasionally, extinction isn't always forever, with the extinct critter resurfacing upon a second, third, or even tenth look. Maybe the Bramble Cay rat will make another appearance after hiding out for a few years.
Posted by Fritz at 7:03 PM