A Light at the End of the Russiagate Tunnel?

Or just another train? CNN claims  Justice Department preparing for Mueller report as early as next week. Of course, the report, as such will go to AG Barr, who will then decide what to do about. Trump will be out of town.


Attorney General Bill Barr is preparing to announce as early as next week the completion of special counsel Robert Mueller's Russia investigation, with plans for Barr to submit to Congress soon after a summary of Mueller's confidential report, according to people familiar with the plans.

The preparations are the clearest indication yet that Mueller is nearly done with his almost two-year investigation.
The precise timing of the announcement is subject to change.

The scope and contours of what Barr will send to Congress remain unclear. Also unclear is how long it will take Justice officials to prepare what will be submitted to lawmakers.

But with President Donald Trump soon to travel overseas for a summit with North Korean leader Kim Jong Un, Justice officials are mindful of not interfering with the White House's diplomatic efforts, which could impact the timing.

On Monday, Tuesday and Wednesday last week, special counsel's office employees carried boxes and pushed a cart full of files out of their office -- an unusual move that could foreshadow a hand-off of legal work.

At the same time, the Mueller prosecutors' workload appears to be dwindling. Four of Mueller's 17 prosecutors have ended their tenures with the office, with most returning to other roles in the Justice Department.

Even with these signs of a wrap up, the DC US Attorney's office has stepped in to work on cases that may continue longer than Mueller is the special counsel.

AllahPundit: DOJ Planning To Announce As Early As Next Week That Mueller’s Investigation Is Finished


I am prepared for any eventuality in terms of the report’s findings. I am not yet fully prepared for the reality that we’ll probably never get to read the actual report, even though Bill Barr already alerted us to that possibilityduring his confirmation hearing. We’ve been watching this cloak-and-dagger TV drama for two farking years. We deserve closure.

What we’re going to get, it sounds like, is a summary of Mueller’s findings, probably not the actual text. So, a “Scooby Doo mysteries” degree of closure.


Commenters say ABCNews has also heard this, which also means near-zero to me.
On the other hand, some point out that now that Sleepy Jeff isn't AG any longer, Mueller may feel some need to actually wrap up before he starts getting actual supervision.

Butthurt Brennan: Mueller report may be 'anti-climactic,' says ex-intelligence director. He should know; he helped concoct it out of thin air.


“I think the hope is that the Mueller investigation will clear the air on this issue once and for all. I’m really not sure it will, and the investigation, when completed, could turn out to be quite anti-climactic and not draw a conclusion about that,” Clapper said Wednesday on CNN.

Some more interesting speculation from Sundance at CTH:  How Long Before We Hear About FBI Recordings in The White House?… Did Trump have the Green Room stripped to the walls to remove FBI bugs left behind by the Obama thugs? Hmm. Sundance also looks at Trey Gowdy's interview with a different point of view: Trey Gowdy Draws Distinction – McCabe Ain’t Talking About “Crossfire Hurricane”…

In the first investigation (Crossfire Hurricane), presumably the defensive -albeit obtuse- position of the FBI is that Trump wasn’t a specific target. [It would be too toxic for the Obama DOJ and FBI to directly admit they were investigating an opponent’s political campaign] However, in the second set of McCabe personal investigations, Trump was definitely the target.

If we take what Gowdy is saying; and overlay Robert Mueller absorbing McCabe’s investigations; and then overlay Devin Nunes recent statements about the August 2nd, 2017 Rosenstein origination memo; a picture emerges.

Likely the first task Mueller took on was the immediate two McCabe investigations, from May 10th, 2017, where Trump was the direct target. However, as that phase of the Mueller probe found nothing of substance (likely with the August 2nd clarification memo), Mueller evolves into investigating the original premise behind 2016 Crossfire Hurricane (the trump campaign) which contained specific targets (Flynn, Manafort, Page, Papadopoulos) and specific evidence (Ohr/Steele Dossier).


Steele’s dossier was the opening salvo. A document sent to the State Department by Clinton proteges Cody Shearer and Sidney Blumenthal was another. A thumb drive given by Clinton campaign lawyer Michael Sussman to FBI general counsel James Baker was a third. Simpson's thumb drive given to Bruce Ohr was a fourth. And Nellie Ohr’s thumb drive would be a fifth. At least three of those work products — those from Steele, Shearer/Blumenthal and Nellie Ohr — resemble what many people might consider a dossier.
. . .
Ohr’s testimony also revealed that the DOJ’s internal watchdog, the inspector general (IG), was interested in his actions. “They have asked to interview me and I will talk with them,” Ohr explained.

No matter what the IG investigation finds, it is clearer today than ever before that Ohr played an essential role in feeding a Clinton-financed political opposition-research project to the FBI. 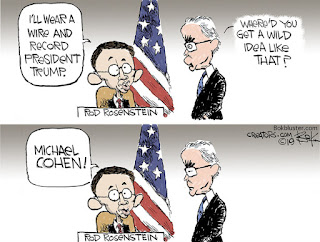 Read it all. Red State, John Solomon’s Revelation Of A Third Dossier Is The Latest Sign The Assault Against Trump Has Reached A Tipping Point. It's starting to look like a rat. Well, it always did to me. IBD, Rod Rosenstein Out, William Barr In: Time To Investigate Deep State Plot Against Trump. Bloomberg, Rod Rosenstein Has Some Serious Explaining to Do. "Why would the deputy attorney general help Trump fire the FBI director, then investigate the president for doing so?" I'm sure he's been very careful, but he has to have broken a law or two along the way. CNS News, Judicial Watch Sues DOJ: We Face DOJ/FBI 'Cover-Up' of Planned 'Coup Against President Trump'. George Neumayr at AmSpec, FBI’s Weaselgate. At NYPo, Rich Lowry goes off on The demented FBI bid to oust Trump. Katie Pavlich at Townhall, New Poll: Majority of Voters Want a Special Prosecutor to Investigate Attempted Coup Against Trump


Fifty-six percent (56%) of Likely U.S. Voters believe senior federal law enforcement officials are likely to have broken the law in their discussions in May 2017 to oust Trump, with 37% who say it is Very Likely. The latest Rasmussen Reports national telephone and online survey finds that 36% consider that unlikely, with 19% who say it’s Not At All Likely that they broke the law.

And on to the McCabe Macabre: George Parry at Am Spec,  Andrew McCabe: Faux Hero of Our Times  McCabe Says McConnell, Ryan, Others Approved of His Trump Probe. Well, to say that most of the congressional Republicans hate Trump for overturning their apple cart is no surprise. But Trey Gowdy thinks it's another McCabe lie: Trey Gowdy doubts Andrew McCabe told ‘Gang of Eight’ about Trump investigation, and apparently Congressional rules forbid them from talking about it if they did. When did that stop a Congressman from leaking? At Da Caller, Jim Jordan Claims Andrew McCabe Told Him Something Completely Different About Trump And Russia . It sounds like McCabe is having troubles keeping all his lies straight. The Federalist, Andrew McCabe Can’t Keep His Story Straight. Hey, I thought of that independently!


“Well, I wasn’t informed or I would have objected. Remember even when all the way up to the day James Comey was fired, he told us when we deposed him that there was no evidence of any type of coordination between the Trump campaign and Russia. All the way up until May 9 of 2017,” Jordan said.

Fox, Meghan McCain stuns Andrew McCabe on 'The View,' asks if he was New York Times leaker. Good for Meghan. Fox, McCabe says he doesn't recall discussing infamous 'insurance policy' with Strzok, Page in 2016. In addition to Mrs. Clinton's money, through Terry McAuliffe, he also got her memory problems. Ed Morrissey at Hot Air, McCabe: On Second Thought, No One Was Counting Cabinet Votes On 25th Amendment

I know McCabe is a liar, it's well established and all that, but any theories as to why he couldn't even stick with his Sunday story for two days? https://t.co/xlyfGiC1TL
— Mollie (@MZHemingway) February 20, 2019

Yes, ABC News reported in March 2018 that McCabe personally ordered an investigation into whether Jeff Sessions -- I repeat, JEFF SESSIONS -- was a Russian agent. https://t.co/UO59vg5zod A completely out-of-control conspiracy theorist was at the top of the FBI.
— Mollie (@MZHemingway) February 20, 2019


No wonder Trump Is Beyond Obsessed With Andrew McCabe (Da Beast). When you try to kill the king. . .

From the Wombat's In The Mailbox: 02.19.19 American Thinker: Crime & Punishment For The Deep State


Where is the reckoning for this? Treasonous activities have so far led to the perpetrators being fired, but not much else. This is not a proper reckoning. They write books, make media appearances to promote their books, appear on cable news shows, and flaunt their defiance on social media. None are behind bars or being prosecuted (yet). That seems to be reserved only for Trump associates like Paul Manafort, still in solitary confinement.

The players in this coup are not only McCabe and Comey, but also Clapper and Brennan, as well as second tier FBI and DOJ officials including Strzok, Yates, Page, Ohr, Baker, and others. One can’t leave out the ring leaders of this entire cabal of corruption – Clinton and Obama. Aside from Obama, who elected them? Justice and intelligence officials are unelected and have no mandate to carry out the will of the people. Only Donald Trump now carries that mantle.

The Clinton’s have a long list of illegalities and scandal, dating back to their days in Arkansas. Flash forward to Hillary Clinton’s illegal home-based email server containing hundreds of thousands of emails, many highly classified, ending up on the laptop of sex-offender Anthony Weiner. And available to whoever had access to that laptop, whether the Chinese or the Muslim Brotherhood, the group Weiner’s wife Huma’s parents are affiliated with.

The FBI covered this all up, for expediency, as they didn’t want to open a criminal investigation into their future boss, who the media magpies stated unequivocally would win the 2016 election in a landslide.

How many top FBI and DOJ officials lied to Congress during hearings over the past two years? I thought this was a crime. Robert Mueller sure thinks lying to Congress or the FBI is criminal. Ask Flynn, Papadopoulos, or Cohen.

Where is the reckoning on this illegal behavior? Why is justice meted out based on politics, and not instead blind to political considerations as represented by a blindfolded Lady Justice holding the scales of justice? She also carries a sword, representing punishment. The modern Lady Justice seems to wear a pink pussy hat and holds a tilted scale in one hand and a book contract in the other.

The National Institute of Justice discusses deterrence: “The crime prevention effects of the threat of punishment.” Does anybody in the Deep State truly believe they are about to be caught and punished? Quite the opposite, actually. They are busy repeating their lies on cable news show and social media, writing and selling books with fawning media adulation.

Some say there is panic in DC and that pain is coming, but where is the evidence of that? Are Huber and Horowitz cleaning up the corruption or just rearranging the furniture?

Axios, Judge grants Cohen’s request to push back start of prison term. The Saul Goodman of Russiagate.
Posted by Fritz at 9:33 AM