So did you hear that Andy McCabe has a book to sell, and he's saying all kinds of interesting things to generate interest in it. If what he says is really true (a big if), what he and his cohorts cooked up in the wake of James Comey's firing is little short of an attempted coup.

The Atlantic, When James Comey Was Fired

Yahoo! McCabe: There were 25th Amendment discussions at DOJ to remove Trump from office

Althouse excerpts the NYT in "McCabe Says Justice Officials Discussed Recruiting Cabinet Members to Push Trump Out of Office.". As usual, most of the insight is in the comments.

By way of In The Mailbox: 02.14.19, Legal Insurrection:  Andrew McCabe Admits DOJ Considered How To Remove Trump Under 25th Amendment After Comey Firing and Weasel Zippers: Did Andrew McCabe Just Admit To Plotting a Coup Against Trump On 60 Minutes?. Yes. 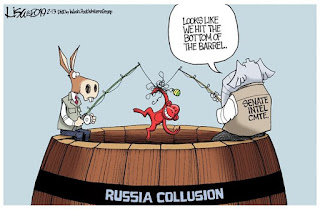 
In a string of morning tweets, Trump wrote that the “disgraced” McCabe “pretends to be a ‘poor little Angel’ when in fact he was a big part of the Crooked Hillary Scandal & the Russia Hoax” and “a puppet for Leakin’ James Comey.”

The president added that an internal watchdog report that was used to justify McCabe’s ouster was “devastating.”

The report found that McCabe had a “lack of candor” with investigators looking into FBI leaks about its probe into the Clinton Foundation during the 2016 presidential race.

The White House piled on hours later, saying McCabe “has no credibility” because of what it said were his efforts to deceive investigators looking into the leaks.

“His selfish and destructive agenda drove him to open a completely baseless investigation into the president,” press secretary Sarah Huckabee Sanders said in a statement. “Andrew McCabe has no credibility and is an embarrassment to the men and women of the FBI and our great country.”

It's hard to disagee. Adam Mill at Da Federalist, As The Russia Hoax Begins To Unravel, The Gaslighting Begins


The moment of truth is upon the hoax boosters. Like Costanza, the hoax boosters are running out of plausible locations in which the fictitious Russia collusion house could be located, and they know it. But unlike the “Seinfeld” episode, nothing about this hoax has been amusing. The hoax boosters have dragged this country through a long nightmare.

The media and their willing accomplices in the DOJ will have a lot to answer for when the truth finally comes out. No wonder they’re pushing so hard to hide it.

According to the Peacock, You may be disappointed by the Mueller report. And by you, they mean Democrats. And one of the reasons why? Senate Confirms Bill Barr as Attorney General. Bill Barr is well known to have taken a dim view of the Mueller's teams attempts to view the firing of Comey as "obstruction of justice", and his packing the team with Democratic head hunters. You do the math.

Mediaite, Napolitano Floats It: Manafort is Facing ‘So Much Jail Time’ He Might Be ‘Candidate For a Pardon’. I think Trump should issue blanket pardons for anyone convicted of process crimes generated by this investigation once it's over. Let any tax convictions or other crimes not related to the course of the investigation stand.

And the court jester of Russiagate, Michael Avenatti Gives Up Control Of His Law Firm After Being Accused Of Hiding Millions. It couldn't happen to a more deserving fellow.