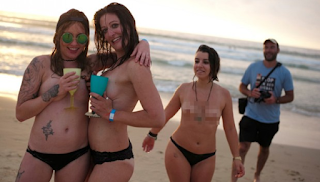 New Hampshire's highest court upheld Friday the conviction of three women who were arrested for going topless on a beach, finding their constitutional rights were not violated.
In a 3-2 ruling, the court decided that Laconia's ordinance does not discriminate on the basis of gender or violate the women's right to free speech.

Not all the people fighting to free the nipple are the ones you necessarily want to see on the beach. 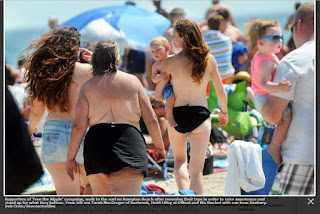 Heidi Lilley, Kia Sinclair and Ginger Pierro are part of the Free the Nipple campaign — a global campaign advocating for the rights of women to go topless. They were arrested in 2016 after removing their tops at a beach in Laconia and refusing to put them on when beachgoers complained. Pierro was doing yoga, while the two others were sunbathing. 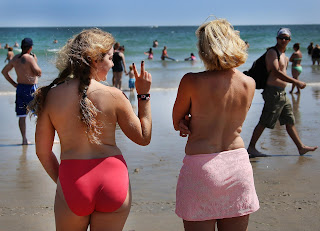 The Laconia law on indecent exposure bans sex and nudity in public but singles out women by prohibiting the "showing of female breast with less than a fully opaque covering of any part of the nipple." A lower court judge refused to dismiss the case, and the women appealed to the state Supreme Court.

"We are extremely disappointed in the Court's ruling that treating women differently than men does not amount to sex discrimination. The court has effectively condoned making it a crime to be female," the women's lawyer, Dan Hynes, said in a statement. "Since the N.H. Constitution, which prohibits sex discrimination, was not enough to prevent this unequal, and unfair treatment, we are hopeful the New Hampshire legislature steps up to correct this injustice by outlawing Laconia's ordinance."

Courts in several states, including New York and Colorado  have ruled that women cannot be treated unequally by being forced to cover their nipples on the beach when men are allowed.

How long can we live in a country where the nipple is half slave and half free?


"A house divided against itself cannot stand." I believe this government cannot endure, permanently half slave and half free. I do not expect the Union to be dissolved—I do not expect the house to fall—but I do expect it will cease to be divided.

I can hardly wait for the arguments at the Supreme Court, and see how Sotomayor, Kagan and Ginsberg (assuming she's still alive) will rule. Topless, I hope.

Linked at Pirate's Cove in the famous weekly Sorta Blogless Sunday Pinup and links. Wombat-socho has Rule Five Sunday: Post-Valentine’s Day Pinup up and running.
Posted by Fritz at 5:09 PM