The Bay Bridge Crossing Study is progressing, and new maps showing 14 possible crossings have been published. Four of those possible crossings are in Calvert County, with another proposed in St. Mary's that would drastically affect our traffic.  The four proposed in Calvert are in Chesapeake Beach, Plum Point, St. Leonard, and Cove Point.  Click here to view the full set of maps, each of which shows different features such as land use, environmentally sensitive areas, etc. which will be taken into account during the decision-making process. Note that the maps are labelled, "Draft" and "Pre-Decisional and Deliberative".

It isn't difficult for County residents to imagine what a huge impact a crossing anywhere in Calvert would have. Queen Anne's County, where traffic from the current Bay Bridge is most felt, sees an explosion of traffic in the summer - upwards of 118,000 daily trips on weekends, with six lanes of traffic along portions of MD 50. Queen Anne's becomes a divided County, with backups along the highway that can run for miles and local residents unable to go anywhere. 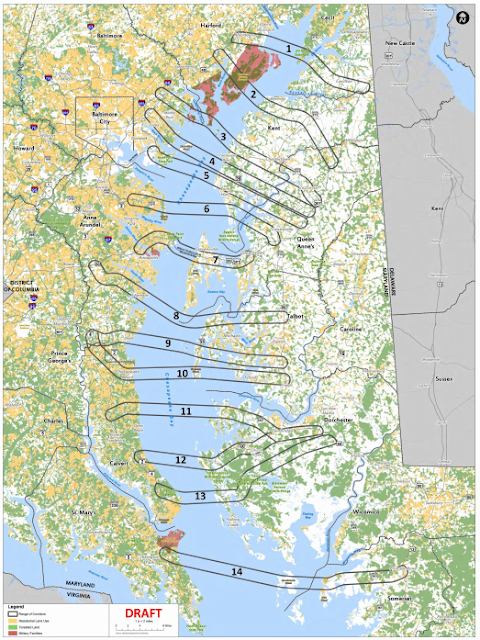 Yep, number 12 is right smack on top of us. I'm not too worried; they've been talking about a new Bay Bridge since we arrived in Maryland, and they don't seem especially close yet. I do wonder why they don't propose to take advantage of the slightly shorter path from the terminus at Cove Point to the place where #12 touches down on Taylors Island.
Posted by Fritz at 7:14 PM