The testimony was delivered last fall to the House Oversight and Judiciary Committees. Fox News has confirmed portions of the transcript. It provides additional insight into discussions that have returned to the spotlight in Washington as fired FBI Deputy Director Andrew McCabe revisits the matter during interviews promoting his forthcoming book.

Baker did not identify the two Cabinet officials. But in his testimony, the lawyer said McCabe and FBI lawyer Lisa Page came to him to relay their conversations with Rosenstein, including discussions of the 25th Amendment.

“I was being told by some combination of Andy McCabe and Lisa Page, that, in a conversation with the Deputy Attorney General, he had stated that he -- this was what was related to me -- that he had at least two members of the president’s Cabinet who were ready to support, I guess you would call it, an action under the 25th Amendment,” Baker told the committees.

Remember, the Mueller Probe is in reality started by by this crowd led Andrew Weissman, who graciously allowed Robert Mueller to appear as its figurehead. More from Byron York, WaEx, Eight days in May: New revelations about intrigue to remove Trump


There are new revelations about what took place in Washington during the extraordinary period from May 9, 2017, when President Trump fired FBI Director James Comey, to May 17, 2017 when Trump-Russia special counsel Robert Mueller was appointed.

The short version is: The reports were true. Deputy Attorney General Rod Rosenstein really did discuss wearing a wire to secretly record the president. Rosenstein and others did discuss invoking the 25th Amendment to remove the president from office. And the FBI did adopt an aggressive new investigation strategy, targeting the president himself, almost instantly after the Comey firing.

It's all true, that is, if revelations in an upcoming book by former FBI Deputy Director Andrew McCabe are accurate. The bottom line on that is that, at least from what we know now, McCabe's story seems consistent with information congressional investigators have been able to glean elsewhere.

"It's just like we thought all along," said one House Republican upon hearing the news. "If McCabe's account is true, it confirms what we thought, that Rod Rosenstein was serious when he talked about wearing a wire and invoking the 25th Amendment. Rosenstein should be under oath answering our questions. We need to know who was in the room and what was said."

Rosenstein must really know where a lot of bodies are buried, to still involved. Roger Kimball at Spectator USA,  The deep blob, Beware the suffocating metastasis of the administrative state


The reality of this slow-motion, suit-and-tie style attempted coup is difficult to keep front and center of one’s attention partly because of the non-stop media collusion (that word again!), partly because the forms, but not the substance, of Constitutionally sanctioned activity are observed. Andrew McCabe, who lied to the FBI about important matters, is at the beginning of a big book tour. Michael Flynn, briefly President Trump’s National Security Adviser, set-up by the FBI and in short order sound himself bankrupted by legal fees and out of a job. He may face jail time.

Michael Goodwin: Andrew McCabe is a national disgrace – and we owe him a big, fat thank you


McCabe, you see, has reminded us once again that there really is a powerful deep state, and that there has not been a full accounting of rampant FBI misconduct during the presidential campaign of 2016.

A must-read from Andy McCarthy at NR, Collusion: The Criminalization of Policy Disputes


The point is that if we are going to obsess over collusion rather than the actual crime of conspiracy, then we need to evaluate the Russian contacts of Trump associates in the context of everyone who has interacted with Russia in the last quarter-century. Under administrations of both parties, Washington has maintained that post-Soviet Russia was a perfectly fine country to partner with and do business with. Did the Trump campaign hope to tap Kremlin-connected sources for campaign dirt on Hillary Clinton? That seems undeniable. But it is not a crime per se. How does it rank on the scale of unsavory political behavior? You’d have to compare it to, for example, Democratic-party entreaties to the Kremlin — back when the Russians were our Cold War Soviet antagonist — for help in the campaigns against Presidents Gerald Ford and Ronald Reagan.

Which segues quite handily into Senate panel to investigate meetings between Russians, Obama officials. Sauce for the goose and all that.

Committee leadership published letters sent to the current heads of the U.S. Treasury Department and Federal Reserve raising concerns over reports that Ms. Butina, a 30-year-old gun-rights activist, met with officials from the agencies during the Obama administration. 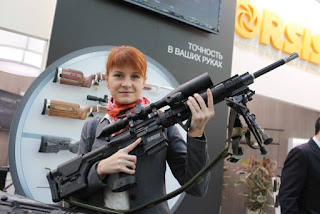 It's collusion, I tell you! Off with their heads! Except hers, of course, 'cause she's a little cute.

“The Senate Finance Committee has a constitutional responsibility to engage in vigilant oversight of entities and government agencies within its jurisdiction,” wrote Senators Charles E. Grassley, Iowa Republican, and Ron Wyden, Oregon Democrat, the committee’s chairman and ranking member, respectively. “A critical issue facing the Committee and the country is the extent to which the Russian government engaged in efforts designed to undermine our political system and governmental policy through obfuscation and manipulation.” 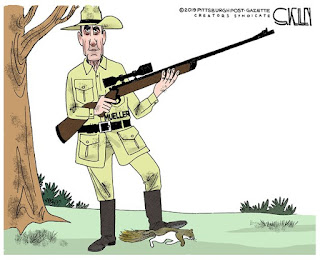 Axios, Mueller says Paul Manafort should serve 19-24 years in prison. Trump should pardon him for any "process" crime committed as a result of the Weissman Team's coercion, and let stand any crimes committed out of greed, like tax evasion.


"In the end, Manafort acted for more than a decade as if he were above the law, and deprived the federal government and various financial institutions of millions of dollars. The sentence here should reflect the seriousness of these crimes, and serve to both deter Manafort and others from engaging in such conduct."

If acting like you're above the law is worthy of a life sentence, I can produce a fine list of well deserving DOJ and FBI officials. And the deterrence argument applies there as well.

The Wombat has Rule 5 Sunday: Ski Bunnies! and FMJRA 2.0: Baby, Whatcha Hiding? up and ready for action.
Posted by Fritz at 9:32 AM