Russiagate and a Cup of Coffee

Or two. Ann Althouse asks Did you watch that McCabe thing on "60 Minutes"?


I did. I watched it very closely. With some meticulous rewinding and analysis (where McCabe declared Trump "disgusting" and it was hard to understand exactly why (Trump, campaigning, had weaponized a factoid from the Wall Street Journal)).

I thought the "60 Minutes" presentation followed a clever narrative arc, with a beginning that allowed McCabe to inflate himself, a middle that brought in his wife and complicated the story, and an ending that gave us so much reason to doubt his credibility that I said out loud, "This really isn't favorable to McCabe at all."

At first, I thought the reasons to mistrust McCabe should have been presented up front, so we could question his telling of the story as we went along, but in the end, I liked the narrative arc, which I think is typical of "60 Minutes." We're drawn in, and then things are not what they seemed, and we're challenged. Then, suddenly, it's that ticking clock on the screen. That's all you get. Figure it out!

Here's the full interview, with video and transcript. I'll just excerpt the text of the part we rewound and rewatched about 10 times. . .

No, not yet; hopefully today sometime. Da Hill, McCabe: Trump said 'I don't care, I believe Putin' when confronted with US intel on North Korea. If true, he wouldn't be the first president to doubt his intelligence. And history suggests skepticism is warranted. Also from PJ Media's Live Blog's Liz Sheld,  "Why would Trump believe the FBI at all? They brought the pee-pee dossier to Trump?"  Did President Trump say: "I believe Putin" over U.S. intelligence? CNN,  Former acting FBI director: Trump's 'own words' prompted counterintelligence investigation. So you always open FBI investigations into people whose words you don't lie? Apparently, Breitbart, McCabe: ‘I Believe I Was Fired Because I Opened a Case Against the President of the United States’ Possibly true, and entirely justified based on the lack of evidence used to open the investigation.

Lindsey 2.0 at Da Caller, Lindsey Graham Pledges Investigation Of McCabe, Rosenstein Over ‘Bureaucratic Coup’ . Via Insty, HE’D BE WISE TO LAWYER UP, TOO: Rosenstein Will Leave Justice Department. We'll know the truth if joins up with CNN, MSNBC, CBS or the Democrats.

So we have now spent years on this Russia investigation essentially because McCabe and Rosenstein could not get over the firing of James Comey even after Rosenstein wrote the memo to fire him. So they hired their own special counsel to get rid of the president. It’s clear now.
— Mark Penn (@Mark_Penn) February 17, 2019 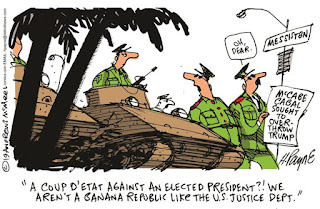 Another must-read review article from Victor Davis Hanson at American Greatness, Autopsy of a Dead Coup. I hope it's dead, but we should cut off the head, stuff it with garlic, stake the heart, and burn the body just to be sure.

David Caton at AmSpec, The Good News About the Botched Bureaucratic Coup


. . .enduring McCabe’s ephemeral celebrity is a small price to pay for avoiding the nightmare of a Clinton presidency. This piece is being written on what we now call “Presidents Day,” a national holiday that originated as a celebration of George Washington’s birthday. It’s useful to recall a maxim used by Washington in a 1794 letter to a friend: “Truth will ultimately prevail where pain is taken to bring it to light.” The comments made on CBS’s Face the Nation by GOP Senator Lindsey Graham, Chairman of the Senate Judiciary Committee, suggest that pains will be taken to bring the truth to light:

Brian C. Joondeph at American Thinker, Crime and Punishment for the Deep State


Where is the reckoning for this? Treasonous activities have so far led to the perpetrators being fired, but not much else. This is not a proper reckoning. They write books, make media appearances to promote their books, appear on cable news shows, and flaunt their defiance on social media. None are behind bars or being prsecuted (yet). That seems to be reserved only for Trump associates like Paul Manafort, still in solitary confinement.

Da Hill, Five things to watch as Barr takes the reins of Justice, Mueller probe. I'm hoping he tears a new asshole in what's left of the leadership in the FBI and DOJ.


A wait of more than three months for the first appeals court ruling on the legality of special counsel Robert Mueller’s appointment is fueling suspicion among court watchers that the decision might contain an unwelcome surprise for Mueller’s team.

Even the lawyer who brought the challenge doubts that the three-judge D.C. Circuit panel hearing the case will upend Mueller’s authority nearly two years into his investigation of alleged collusion between the Trump campaign and Russia. But just a single judge expressing criticism of any aspect of Mueller’s appointment or conduct is sure to be seized on by President Donald Trump and his allies as fresh evidence that Mueller’s installation as special counsel was illegitimate.

When a district court judge publicly questioned Mueller’s mandate and tactics last year, the president leapt at the opportunity to bolster his efforts to discredit the special counsel.

Whether Trump will get another chance to do that in the coming days or weeks because of the as-yet-unreleased D.C. Circuit ruling remains the subject of active debate in legal circles, but a judicial opinion raising doubts about Mueller could be particularly welcome in Trump’s camp as it braces for a potential release containing some of Mueller’s findings.

“On occasion when a case takes longer, it tends to show there are disparate opinions. That could mean there’s a dissent, but it might not be,” said Enrique Armijo, a law professor at Elon University in North Carolina and a former D.C. Circuit law clerk. “The fact that it’s taking a longer time, if I had to lay down money, I’d say there could be multiple opinions.”

The challenge the D.C. Circuit panel is wrestling with was brought by Andrew Miller, a former assistant to the longtime Trump adviser Roger Stone. Arguing that Mueller was illegally appointed, Miller fought a subpoena to appear before a grand jury in Washington. After losing in front of a district court judge, attorney Paul Kamenar took Miller’s case to the appeals court, which heard arguments in November.

It would be both infuriating and gloriously redeeming if they judges were to declare the whole Mueller mandate illegal, and the investigation the fruit of the poison tree, now that it's nearly over.

Julie Kelly at American Greatness, on Adam Schiff: The Jussie Smollett of Trump-Russia Collusion while Dr. John at Flopping Aces has a different simile, Captain Adam Queeg is determined to find the strawberries.

Well this was stupid, Roger Stone apologizes after he posted a photo of the judge who imposed a gag order in his case with CROSSHAIRS next to her head and denies it suggested she should be targeted (Daily Mail). He does seem to want notoriety, and he's been out of the papers, since, well, yesterday.
Posted by Fritz at 9:29 AM