Human impacts prior to the Industrial Revolution are not well constrained. We investigate whether the decline in global atmospheric CO2 concentration by 7–10 ppm in the late 1500s and early 1600s which globally lowered surface air temperatures by 0.15∘C, were generated by natural forcing or were a result of the large-scale depopulation of the Americasafter European arrival, subsequent land use change and secondary succession.

We quantitatively review the evidence for (i) the pre-Columbian population size, (ii) their per capita land use, (iii) the post-1492 population loss, (iv) the resulting carbon uptake of the abandoned anthropogenic landscapes, and then compare these to potential natural drivers of global carbon declines of 7–10 ppm. From 119 published regional population estimates we calculate a pre-1492 CE population of 60.5 million (interquartile range, IQR 44.8–78.2 million), utilizing 1.04 ha land per capita (IQR 0.98–1.11).

Furthermore, we show that the global carbon budget of the 1500s cannot be balanced until large-scale vegetation regeneration in the Americas is included. The Great Dying of the Indigenous Peoples of the Americas resulted in a human-driven global impact on the Earth System in the two centuries prior to the Industrial Revolution. 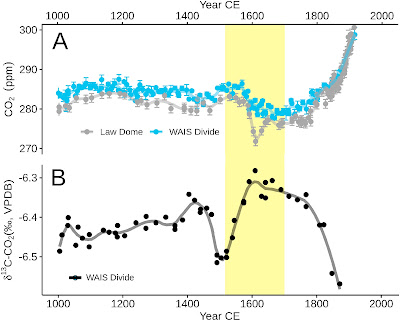 Evil white men, is there nothing we can't accomplish if we try?

We estimate that 55 million indigenous people died following the European conquest of the Americas beginning in 1492. This led to the abandonment and secondary succession of 56 million hectares of land. We calculate that this led to an additional 7.4 Pg C being removed from the atmosphere and stored on the land surface in the 1500s. This was a change from the 1400s of 9.9 Pg C (5 ppm CO2).

Including feedback processes this contributed between 47% and 67% of the 15–22 Pg C (7–10 ppm CO2) decline in atmospheric CO2 between 1520 CE and 1610 CE seen in Antarctic ice core records. These changes show that the Great Dying of the Indigenous Peoples of the Americas is necessary for a parsimonious explanation of the anomalous decrease in atmospheric CO2at that time and the resulting decline in global surface air temperatures.

These changes show that human actions had global impacts on the Earth system in the centuries prior to the Industrial Revolution. Our results also show that this aspect of the Columbian Exchange – the globalisation of diseases – had global impacts on the Earth system, key evidence in the calls for the drop in atmospheric CO2 at 1610 CE to mark the onset of the Anthropocene epoch (Lewis and Maslin, 2015, 2018).

We conclude that the Great Dying of the Indigenous Peoples of the Americas led to the abandonment of enough cleared land in the Americas that the resulting terrestrial carbon uptake had a detectable impact on both atmospheric CO2 and global surface air temperatures in the two centuries prior to the Industrial Revolution.

The Little Ice Age has been an unfortunate thorn in the side of Catastrophic Anthropogenic Global Warming theory. By making the start of our current warming trend at the bottom of a cold spell, it has cast doubt on the extent to which the modern warm period is a product of natural cycles or human intervention. Like the Medieval Warm Period that preceded it, it would be convenient to eliminate it, or at least blame it on human activities, especially CO2.
Posted by Fritz at 9:34 AM