From Stacy McCain: Mitch the Ninja Turtle Will Force Democrats to Vote on Their Own Plan 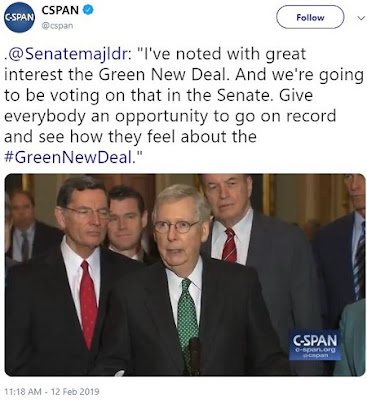 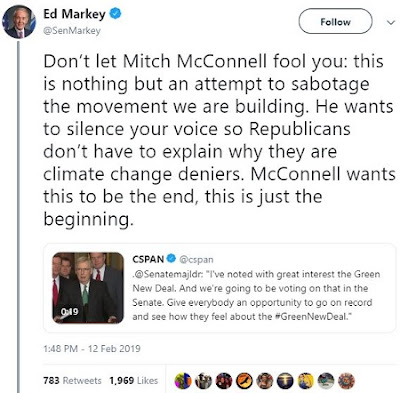 Amateur hour in the House Democrat majority — the blundering overreach of freshman Rep. Alexandra Ocasio Cortez — gives Senate Republicans a chance to pounce and seize, so to speak:


Senate Majority Leader Mitch McConnell said Tuesday that the Senate would vote on the Green New Deal introduced last week by Sen. Edward Markey, D-Mass., and Rep. Alexandria Ocasio-Cortez, D-N.Y.
“I’ve noted with great interest the Green New Deal, and we’re going to be voting on that in the Senate to give everybody an opportunity to go on record,” McConnell told reporters.
The proposal, which is not expected to pass the Republican-dominated upper chamber, could force some Democrats to make a politically awkward calculation.
Democratic liberals, including all of the senators currently running for president, have come out in support of the legislation, which calls for generating 100 percent of the nation’s power from renewable sources within 10 years. . . .
Democratic moderates have been less than enthusiastic about the proposal. House Speaker Nancy Pelosi derisively referred to the House version of the resolution as a “green dream,” while only 11 of the 47 senators who caucus with the Democrats have signed on as sponsors.

(Hat-tip: Instapundit.) The clumsy attempt by Democrats to distance themselves from the crazy “Green New Deal” FAQ that has now been removed from Ocasio-Cortez’s website showed how the party’s brash young socialist celebrity was Not Ready for Prime Time. Even so eminent a progressive as Jonathan Chait has admitted that the problem with the proposal was not a “botched” roll-out, as some Democrats have claimed, but simply that the plan is a bad idea. And now McConnell, shrewd tactician that he is, will force Senate Democrats to vote on this idea.

People who can't pass a simple test on the three laws of thermodynamics should not be eligible for Congress.