A Regrowth of Russiagate

A bit of a revival this morning, as the world assimilates the knowledge that Andrew McCabe, Rod Rosenstein and other heavy hitters at the FBI and DOJ considered a coup against the lawfully elected President, and then set in motion a long term investigation designed to hobble him to protect their own jobs.

Da Federalist: 7 Big Takeaways From Andrew McCabe’s Planned Coup 1. McCabe Proves Trump Firing Comey Was Justified, 2. McCabe and His Co-conspirators Only Ever Had The Dossier to Go On, 3. Much Of This Seems Like A Cover-up, 4. The Conspirators Might Be Turning On Each Other, 5. McCabe Might Be Telling The Truth About Rosenstein, 6. The Whole Russia Probe Is Tainted And Corrupt and 7. Comey, McCabe, Clapper, And Brennan Are Unpatriotic Dopes. Read all about it! 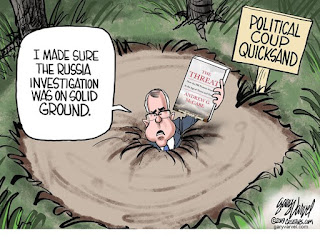 
Question: “Do you know what direction that went? Was it Mr. Rosenstein seeking out members of the Cabinet looking to pursue this 25th Amendment approach or was it the other way around?”
Baker: “What I recall being said was that the Deputy Attorney General had two members of the Cabinet. So he – how they came to be had, I don’t know, but…”
Question: “So he had two members, almost like he was taking the initiative and getting the members?”
Baker: “That would be speculation on my part.”
Baker also said he did not know the names of the two Cabinet officials.
“Lisa and Andy did not tell me, and my impression was they didn’t know themselves,” he said.

Only Rod Rosenstein knows for sure. He must testify. From the Lid, BOMBSHELL: Rep. Gohmert Says Rosenstein Offered To Wear Wire Two Different Times It was just a joke, man, the gun wasn't loaded!


Actually, it sounds high-schoolish. He's not exactly denying a coup plot, which was firmly established after his 60 Minutes interview to be aired Sunday. He's actually just trying to extricate himself from responsibility for it — saying he's now repeating stories he heard from others, and the whole thing was former Justice Department official Rod Rosenstein's idea.

Not me. Rosenstein did it.

Put 'em both in jail. The same cell. With one spoon. A Russian view at Sputnik's Plot Thickens: Analyst on Clinton, Alleged FBI Quid Pro Quo and Trump 'Ouster'

McCabe (is a son-of-a-bitch) "1. Just think about it for a minute, folks: the deputy director of the FBI believes that he has the legal standing to commit sedition by investigating a duly elected POTUS in order to removed him."

Mark Penn: To get Trump, FBI and Justice Department officials trampled the Constitution


The most egregious anti-democratic actions ever taken by the what can now fairly be called the Deep State are confirmed with the publication of fired FBI Deputy Director Andrew McCabe’s new book detailing how the FBI and Justice Department plotted to remove President Trump from office for firing FBI Director James Comey.

Justice Department and FBI officials spied on U.S. citizens with false warrants, gave a pass to one presidential campaign with a predetermined investigation, investigated another political campaign on the basis of no verified evidence, and illegally leaked information on investigations. They discussed wiretapping and using the 25th Amendment to the Constitution to remove President Trump, and appointed a special counsel as a retaliatory move for Comey’s firing.

It is now crystal clear that the highest echelons of the Justice Department and FBI had morphed from the world’s most professional law enforcement organization into a Third World rump group. They had the hubris to believe that they – not the American people or their duly elected representatives – should decide who governs and how.


Ever wonder why people hate lawyers? Consider Deputy Attorney General Rod Rosenstein’s non-denial denial of his participation in discussions of an attempted coup against the duly elected president of the United States.

The story is being given a second life thanks to the hype surrounding the rollout of a new book by Andrew McCabe, the former deputy director of the FBI.

Could this statement possibly be more disingenuous? Consider:

1. Rosenstein says he never authorized recordings. But no one claims that he did. The question is whether he and McCabe discussed the possibility of authorizing them. If he could do so, Rosenstein would deny that this discussion happened at all. But he can’t do that because the FBI memorialized it at the time. Since he can’t credibly deny McCabe’s admission that the two of them talked about recording the president, Rosenstein resorts to the shopworn tactic of distorting the allegation.

It is understandable that the deputy attorney general wishes he hadn’t talked about removing the president. Legally, it was a harebrained idea. As a matter of civics – unelected bureaucrats brainstorming about how to reverse a democratic election – it was remarkably arrogant. But it happened, nonetheless. Rod Rosenstein’s lawyerly evasions can’t change that.

Da Mail, Trump quotes Rush Limbaugh's claim that Mueller's investigators 'ought to be in jail' for cover-up of 'silent coup' against the president. I'm not outraged. Are you?

At LI, The Collapsing Collusion Narrative Week at Legal Insurrection. Not a good week for "the narrative."

Twitchy, Why won’t Adam Schiff answer whether or not he’ll accept Robert Mueller’s findings? Oh come on, you're not that stupid.

House Intel chief Adam Schiff's two-part response when CNN asked if he will accept Mueller findings if Mueller does not allege collusion. One: We'll have to do our own investigation. Two: Mueller, bless his heart, he tried his best. pic.twitter.com/3qsrMc2VF2
— Byron York (@ByronYork) February 17, 2019


From Da Caller, Media Hypes Roger Stone ‘Revelation’ That Has Been Public For A Year


News outlets and media pundits on Friday seized on a court filing in the special counsel’s case against Roger Stone that referred to communication the longtime Trump confidant had with WikiLeaks and Guccifer 2.0, the group of alleged Russian operatives suspected of stealing Democrats’ emails during the 2016 campaign.

The court filing, which was touted as new, bombshell evidence by numerous news sources, including CNN and MSNBC host Rachel Maddow, may be less than meets the anti-Trump eye.

In one exchange from Oct. 13, 2016, which Stone provided to The Daily Caller on Feb. 28, 2018, WikiLeaks appeared to chastise Stone for making “false claims of association” with the group. (RELATED: Roger Stone’s Full WikiLeaks Exchanges And Passport Photos)

Nearly two years ago, on March 10, 2017, Stone released private Twitter exchanges he had with Guccifer 2.0. He contacted Guccifer 2.0 on Aug. 14, 2016 to say he was “delighted” that its Twitter account had been reinstated after a suspension, the messages Stone released show. Two days later, Stone asked for a retweet of an article he had written. None of the messages show Stone discussing emails or asking for insight into what documents would be released.

I wondered about this. Either the press has no memory, or no honesty. I know, embrace the healing power of "and."
Posted by Fritz at 9:17 AM