Over the River and Through the Woods . . .

Off to Richmond we go. No great advances, or declines to report I'm afraid, although there are a ton of stories to choose from. Oh, there's hints of a 3rd,4th and 5th victim of Lt. Gov. Justin Fairfax, but I'm sure nothing firm will come out before Monday. Reporters need their day's off too!

And reporters are now telling me they have heard about women #3, #4 and #5. Victims should never be outed before they are ready to come forward- but we are way overdue for a resignation.
— Ben Tribbett (@notlarrysabato) February 8, 2019


The cries for his resignation, or impeachment are nearly universal. A long comedown from a few days ago when they were willing to dump Gov. Northam under the bus so he could be elevated. Accordingly, the WaPoo is starting what appears to be a campaign to rehabilitate Northam, with a long article on how he emerged from a racist section of Virginia: On Virginia’s rural Eastern Shore, Northam’s views of race took root.


His reputation in tatters, his career hanging by a thread, Ralph Northam went home to the Eastern Shore. Where his ancestors owned slaves. Where his father wouldn’t tolerate racist behavior.

Virginia’s governor, abandoned by his own party, accused of racism by many of his constituents, traveled to his family homestead near the Chesapeake Bay — a place apart from the rest of Virginia, yet a place where the history of black and white is as painfully enduring as anywhere.

In Onancock, where Northam grew up on an isolated road, on property where his family raised sheep, many of the future governor’s childhood friends left the public schools as soon as they were integrated. Northam stayed and by his senior year was one of two white boys out of the 12 basketball players in the high school team’s photo.

Now 59, Northam (D) stands before his constituents as a marked man. He says he will not resign, but even his allies doubt he can survive the revelation that his medical school yearbook page shows someone in blackface and someone in a Ku Klux Klan outfit.

Northam says he’s not in that photo, but he is no innocent: He did once wear blackface, as a costume in a dance contest. The governor says he is a product of a state and a country where racial hatred is both a nagging scar and a present danger. But he believes he is no symbol of that ugly past. He believes he is an example of change.

It just gets sappier from there. He couldn't help it, he was just born in the wrong place at the wrong time. Also, Virginians are split on governor’s fate amid blackface scandal, poll shows 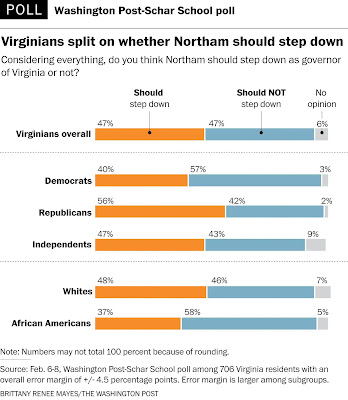 Interesting that blacks, heavily democratic in Virginia, are not disposed to dispose of Northam. Virginia Gov. Ralph Northam says he wants to focus rest of his term on racial equity. Great.


"It's obvious from what happened this week that we still have a lot of work to do. There are still some very deep wounds in Virginia, and especially in the area of equity," he said. "There are ongoing inequities to access to things like education, health care, mortgages, capital, entrepreneurship. And so this has been a real, I think , an awakening for Virginia. It has really raised the level of awareness for racial issues in Virginia. And so we're ready to learn from our mistakes."

However, I saw MD Congressperson Donna Edwards on Fox this morning say all three  needed to resign (including AG Mark Herring, for expropriating black pigment when he was  19), but they needed to do it in a way that preserved the Democrat possession of the governorship, the "will of the people" as she called it.


The scandals that engulfed the state government’s top three leaders have given Republicans renewed hope they can blunt the state’s leftward drift. It was no accident that this week Republicans decided to target Democratic Sen. Mark Warner, the state’s most popular politician who was not thought to be at risk in 2020. They think several newly-elected Democratic House members bungled their response to the first sexual assault allegation against Lt. Gov. Justin Fairfax by, in some cases, waiting days to react— creating an opening for the GOP.

And Democrats worry that the state’s top lawmakers won’t be able to raise money or campaign this year when all 140 seats in the nearly evenly divided legislature are up for grabs.

It’s a rare moment of optimism for Virginia Republicans at a time when their party is down and out nationally, still hurting from the midterm elections when they lost control of the U.S. House.

“They were facing generational political Armageddon,” said John Fredericks, a conservative radio host who served as chairman of Donald Trump’s 2016 campaign in Virginia. “This all changed in eight days. This is an earthquake. It’s a unique opportunity for Republicans.”

Not me. But I can't say I'm not enjoying a little schadenfreude. Democrats, these were your rules. I hope you like them.
Posted by Fritz at 11:01 AM