The new hottest attempt at scaring us with climate forecasting is out: Climate of North American cities will shift hundreds of miles in one generation, from University of Maryland Center for Environmental Science.

In one generation, the climate experienced in many North American cities is projected to change to that of locations hundreds of miles away—or to a new climate unlike any found in North America today. A new study and interactive web applicationaim to help the public understand how climate change will impact the lives of people who live in urban areas of the United States and Canada. These new climate analyses match the expected future climate in each city with the current climate of another location, providing a relatable picture of what is likely in store.

“Within the lifetime of children living today, the climate of many regions is projected to change from the familiar to conditions unlike those experienced in the same place by their parents, grandparents, or perhaps any generation in millennia,” said study author Matt Fitzpatrick of the University of Maryland Center for Environmental Science. “Many cities could experience climates with no modern equivalent in North America.”

Scientists analyzed 540 urban areas that encompassed approximately 250 million inhabitants in the United States and Canada. For each urban area, they mapped the similarity between that city’s future climate expected by the 2080s and contemporary climate in the western hemisphere north of the equator using 12 measures of climate, including minimum and maximum temperature and precipitation during the four seasons.

Climate-analog mapping is a statistical technique that matches the expected future climate at one location—your city of residence, for instance—with the current climate of another familiar location to provide a place-based understanding of climate change. Combining climate mapping with the interactive web application provides a powerful tool to communicate how climate change may impact the lives of a large portion of the population of the United States and Canada.

“We can use this technique to translate a future forecast into something we can better conceptualize and link to our own experiences,” said Fitzpatrick. “It’s my hope that people have that ‘wow’ moment, and it sinks in for the first time the scale of the changes we’re expecting in a single generation.”

I got into the application today (yesterday it was overwhelmed with traffic, and I got this result by applying it to the nearest site I could find close to me, California MD, just across the Patuxent River in St. Mary's County.


For high emissions, Lexington Park's climate in 2080 will feel most like today's climate near Farmers Branch, Texas.

and provides this map for the unmitigated case: 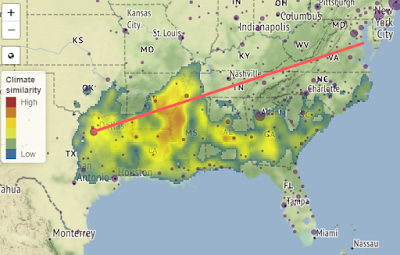 A couple of things to note. A generation for human beings is closer to 30 years than 60, so this application advertises one generation, and presents two. One generation would be closer to 2050. A quick way to cheat, when the models are all weighted to predict higher rates of change farther out in the future, where they have higher rates of uncertainty. And 5 C warmer in 60 years is way beyond the rates of warming predicted even by most of the climate models: 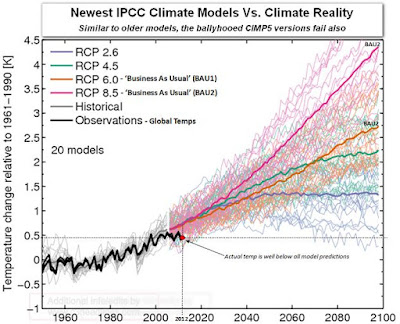 And the models themselves have been consistently running hot compared to the real world: 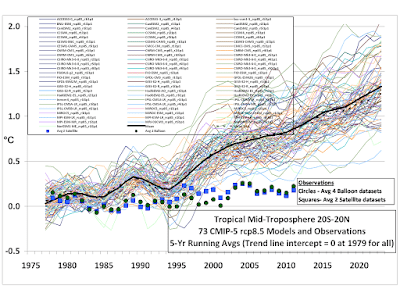 So, unless there's something magic about our location to make it get hotter on average than the rest of the world, it seems like the application is exaggerating the warming considerably in the interest of making it's point.

Another point on the app. Note that the application skips right over a large area of allegedly similar to the predicted climate centered on the Mississippi River, to a region of Texas which seems overall less similar, as if the application seeks to find the site furthest away which it can claim as similar to the projected climate. Also there's an area of modest agreement a couple of hundred miles away on the coast of North Carolina, which seems much more likely to me (similar maritime influence, unlike inland Texas). Actually, having coastal North Carolina's winter climate sounds pretty nice to me right about now. Redfish and Speckled Trout are biting there right now!
Posted by Fritz at 5:47 PM