Elect more Republicans. Anthony Watts at Watts Up With That finds this most interesting scientific study: Data analysis: Global temperature has not increased under Republican presidents, only Democrats


From the website Statistical Modeling, Causal Inference, and Social Science at Columbia University comes this hilarious but real bit of data analysis. Looking at short trends in the global surface temperature data, the analysis shows that global temperature has not increased under Republican presidents, only Democrats. It’s probably spurious correlation, but still very entertaining. – Anthony 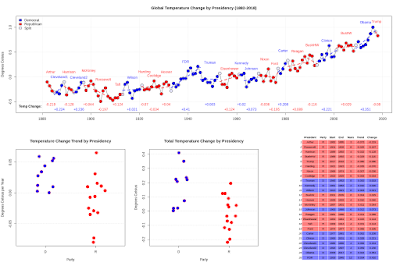 My first thought, beyond simply random patterns showing up with small N, is that thing that Larry Bartels noticed a few years ago, that in recent decades the economy has grown faster under Democratic presidents than Republican presidents. But the time scale does not work to map this to global warming. CO2 emissions, maybe, but I wouldn’t think it would show up in the global temperature so directly as that.

So I’d just describe this data pattern as “one of those things.” My correspondent writes:


I expect to hear it dismissed as a “spurious correlation”, but usually I hear that argument used for correlations that people “don’t like” (it sounds strange/ridiculous) and it is never really explained further. It seems to me if you want to make a valid argument that a correlation is “spurious” you still need to identify the unknown third factor though.

In this case I don’t know that you need to specify an unknown third factor, as maybe you can see this sort of pattern just from random numbers, if you look at enough things. Forking paths and all that. Also there were a lot of Republican presidents in the early years of this time series, back before global warming started to take off. Also, I haven’t checked the numbers in the graph myself.