From Adam Mill at American Greatness, When You Read Mueller’s Report, Remember How It All Started (JJ Sefton at Ace's, spoiler alert: "The Mueller team was a revenge squad and any report it produces should be reviewed in that context")

As we anticipate the potential release (or possible leak) of Special Counsel Robert Mueller’s final report on alleged collusion between Russia and President Trump’s 2016 campaign, it’s important to remember that Mueller is not a detached third party and his report will not represent a dispassionate review of the facts.

Rather, the report will be the product of a team that started coming together long before Trump took office. Not only did many of them know each other beforehand, many shared a common goal: to stop Trump any way they could. It would be unjust to allow the report into the public domain without giving its target, the president, the opportunity to defend himself. 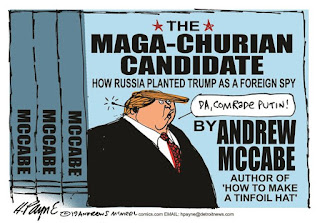 Via MSNBC, The NYT sings the praises of one of Mueller's chief hit men, It’s Mueller’s Investigation. But Right Behind Him Is Andrew Goldstein. But as noted above, much of Mueller's team was assembling itself from the moment it became possible that Trump might be elected. They chose Mueller as their titular head.


“Investigating and prosecuting public corruption offenses can only go so far,” Mr. Goldstein said in a rare speech around the time he joined the special counsel’s team in 2017. “We can only police the outer bounds of misconduct: the really bad stuff, or at least the stuff that we can prove.”

Admitting that the investigation is in search of a crime, and not the result of a crime? From the AP, Rosenstein: Government transparency isn’t always appropriate. Pretty much the same rationale as he gave in his memo recommending Comey's firing.

He added: “There may be legitimate reasons for making exceptions, but as a general principle, in my view, the Department of Justice is best served when people are confident that ... when we’re investigating American citizens in particular, we’re going to do it with appropriate sensitivity to the rights of uncharged people.”
. . .
“The guidance I always gave my prosecutors and the agents I worked with during my tenure on the front lines of law enforcement were if we aren’t prepared to prove our case beyond a reasonable doubt in court, then we have no business making allegations against American citizens,” Rosenstein said.

Meanwhile Reuters wonders What happens if Mueller finds Trump fingerprints in Russia conspiracy? President Pence! Da Wire, Mueller's Final Manafort Filings Are Scant On Russia Details, Never Mention 'Trump' Or 'Collusion'. Shhh, he's just saving the good stuff 'til last. Of course, if he had evidence we had a Russian agent as President he'd have to come forward immediately.


But what the government sentencing document — and Manafort's apparent list of transgressions — doesn't include is evidence of actual collusion with Russia during the course of the Trump for President campaign, the actual focus of Mueller's investigation. Instead, the filing simply says that Manafort committed some of his crimes while under the "spotlight" of the campaign.

Scott Johnson of Power Line on Lessons from Mueller's Memo


Despite Manafort’s multifarious criminal activity, he could still be at large if only he had avoided the Trump campaign. The spotlight can be a killer. I see an unedifying lesson here, though it is not the one the Special Counsel wants to teach Manafort.

From Da Hill, Schiff is still blustering, Schiff warns against withholding Mueller report: 'We are going to get to the bottom of this', while from the WaEx, Trey Gowdy slams Adam Schiff for seeing ‘things that nobody else can see’ about collusion. Cue videos from Sundance at CTH: Trey Gowdy Discusses Adam Schiff and The Vast Russian Conspiracy…


“We are going to get to the bottom of this,” Schiff said Sunday. “We are going to share this information with the public. And if the president is serious about all of his claims of exoneration, then he should welcome the publication of this report.”

Right, because this was never really about finding out if Trump and the RUSSIANS conspired to win the election; it was about obstructing Trump and stopping him from doing the things that people voted for. 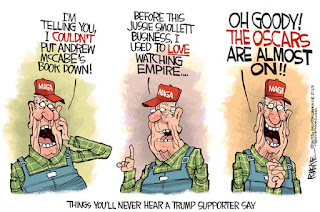 Western FreeP, McCabe: Trump Was Thinking About Russia When He Fired Comey. Probably, in part, but Comey certainly deserved firing for a number of reasons. One good reason should be sufficient. At the WSJ, David B. Rivkin Jr. and Lee A. Casey want us to Investigate McCabe’s 25th Amendment Tale. Yes, by all means. News Busters notices that McCabe Only Gets One Hardball: 'Very Asymmetrical' Attention on Hillary's Emails on his book tour. Another good review article to remind you of how we got here from Margot Cleveland at Da Federalist, The 25th Amendment Talk Isn’t The Real Scandal. The Spygate Coup Attempt Is. Talk is cheap; hiring spies to infiltrate a campaign is a real abuse of government.  From the AP, Trump Org slams probe; Trump Jr. calls feds ‘Stalinist’ It's hard to disagree with him; like Beria said, show me the man, and I'll show you the crime.  Clarice Feldman at the American Thinker, High Ties and Misdemeanors 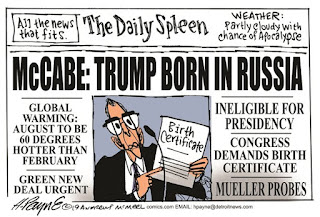 Nothing offends people more than unequal justice -- disparate treatment of protected persons and classes. This week, the FBI and Department of Justice’s hash of equal justice became even clearer and the media’s fat thumb on the scales as well.

If you read nothing else this week, read this essay by Lord Conrad Black in the New York Sun, who links the Special Counsel fiasco and the Jussie Smollett hoax and concludes that we just avoided the “biggest constitutional crisis since the Civil War”...

Ben Stein at Am Spec: What’s Happened to the FBI We Once Knew?. Clearly the view from Hollywood. Ever since the day of J. Edgar Hoover, the FBI has been as well known for it's political skullduggery as it's prowess at catching bad guys. They have an awful lot of power, and power tempts and corrupts. 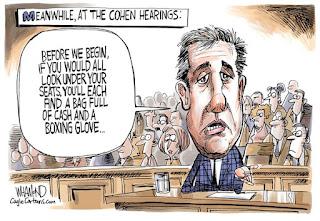 Convicted perjurer promises to tell the truth this time: Cohen to Testify That Trump Engaged in Criminal Conduct While in Office "President’s ex-lawyer will tell House committee he witnessed Trump’s ‘lies, racism and cheating,’ role in hush payments, says a person familiar with his plans." At Da Hill, Curtain rises on 3 days of Cohen drama