Throwing Out Some Red Meat for the Crowd


Researchers behind “Is Meat Sexy?,” published in the journal Food Quality and Preference, tracked more than 1,600 men and women in the US, UK and Australia to explore advertising’s impact on red-meat consumption and how that relates to mating.

When experiencing “sexual motivation,” the men tended to act out in ways that “increase their desirability” as a sex partner, say co-authors Eugene Chan and Natalina Zlatevska, marketing professors at Monash University and University of Technology in Sydney, respectively. 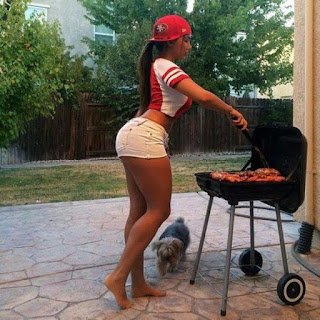 But they aren’t turning into carnivorous Casanovas purely out of lust for lady flesh — it’s also about signaling status, researchers say.

Or bringing home the bacon.


“The link between meat and status is grounded in evolutionary drivers of consumption,” Zlatevska claims. “Cavemen consumed meat in order to be strong, healthy and powerful enough to survive the harsh environment. Royalty and the nobility also consumed meat because it signified wealth.”

Carl’s Jr. styled hotties such as Kim Kardashian as bikini-clad burger-munchers and launched the tacky trend. The fast-food chain eventually dropped the oversexed adsamid backlash, but not before spawning a rash of imitators, including Kraft’s Devour frozen dinners, billed as “Food You Want To Fork.”

The new research suggests an unintended effect of the heavy-breathing ads, Chan says.

“Sexualized images of women can make men eat meat more as a way to increase their masculinity and status, to show them off to the opposite sex,” he says. “[But] since the growing trend of meat consumption harms one’s health and is bad for the environment, sexy ads don’t just sell the latest cologne or clothing — they may have unforeseen consequences.”

I have my own personal theory for the difference in preferences for meat and vegetables by men and women. For most of the past couple of million years or so, humans have lived as hunter/gatherers, with some sexual diversification, men preferentially taking part in hunting game, and women preferentially gathering edible vegetation. People tend to eat some of what they garner on the spot, and thus over time, men would evolve to take advantage of the greater percentage of meat in their diet, and the converse for women.

I think I'll have a steak!

Wombat-socho has Rule Five Sunday: Post-Valentine’s Day Pinup up and running.
Posted by Fritz at 6:00 AM