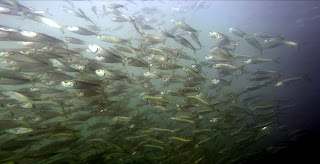 
A threat to shut down Virginia’s menhaden fishery disappeared after an interstate commission decided it wouldn’t find the state out of a compliance with a new quota for the oily fish.

The Atlantic States Marine Fisheries Commission cut the quota for menhaden caught in the Chesapeake Bay by purse-seine vessels by 42 percent back in 2017 — but the General Assembly balked this year and last at enacting that lower quota into state law.

This month, the commission indefinitely postponed taking any action to find Virginia out of compliance, a finding that could trigger a federal moratorium on the fishery.

The commission said that if the Reedville fleet catches more than 51,000 metric tons in the Bay — its current quota — it could still decide Virginia is out of compliance. But it noted that the Bay catch since 2012 has been below that level — Virginia’s noncompliance is strictly that it hasn’t enacted the commission’s cap into state law.


So they didn't catch too much; they just didn't act to do so.


In the background are two big issues.

The first is that the commission’s quota cut reflects a relatively new approach to managing a fishery. Instead of simply looking at the stock of menhaden, the commission worried that menhaden fishing could cut the supply of food for other species, particularly striped bass.

Ben Landry, Omega’s director of public affairs, said the commission’s decision recognized that the new cap was not needed for the conservation of the fishery, which he said is what a finding of noncompliance requires.

OTH, if they didn't catch their quota because they couldn't, that's a bad sign, and somebody should be paying attention.

But Chris Moore, senior regional ecosystems scientist for the Chesapeake Bay Foundation, said it was important that the commission specifically said it could modify the cap when it finishes work to measure the impact of menhaden fishing on other species.

The second issue is commissioners’ concern about how Secretary of Commerce Wilbur Ross would respond to a finding that Virginia should be sanctioned.

He shocked commissioners in 2017 when he declined to impose a moratorium on New Jersey’s summer flounder catch, after the commission found that state out of compliance. That broke a 75-year tradition of implementing the commission’s findings. Commissioners worry a second such decision would render the body irrelevant.