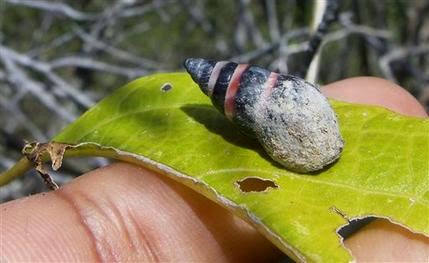 A snail once thought to have been among the first species to go extinct because of climate change has reappeared in the wild.

The Aldabra banded snail, declared extinct seven years ago, was rediscovered on Aug. 23 in the Indian Ocean island nation of Seychelles. The mollusk, which is endemic to the Aldabra coral atoll - a UNESCO World Heritage Site - had not been seen on the islands since 1997, said the Seychelles Islands Foundation.

"Could we live without this little snail? Almost certainly," said Stuart Pimm, a conservation ecology professor at Duke University. "But we simply do not know what species are going to do for us in an economic sense. Probably from the time that somebody baked the first loaf of bread, a housewife said, `I hate bread mold and I wish it would disappear forever.' And of course we know the scientific name of bread mold is penicillin."

An interesting comparison, but I doubt a world shattering antibiotic is going to be found in them.  But maybe, just in case, we should grab the 7 specimens found, grind them up and test them. Or maybe they're simply delicious!

What we really should do, of course, is get a genetic sample from all seven, sequence the DNA and put it on file. Then, if they really should disappear, there is some chance that they can be resurrected.
Posted by Fritz at 5:00 AM