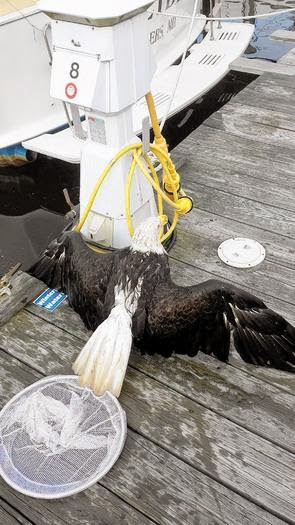 Bald eagle fights for life after being rescued from drowning


Ernie Jenkins, maintenance manager at the Maryland Yacht Club in Pasadena, was opening the fuel dock early Sunday morning when he heard splashing.

He looked down and saw a bald eagle flapping its wings, struggling to get out of the water. Jenkins said he had seen the bird flying around the club on Rock Creek for about two months.

"I didn't want to watch him drown," he said. "If I didn't get him out, he would have died and that was it."

Grabbing a net, Jenkins ran to a pier and reached to get the net around the eagle and pull it to safety. The rescue took about 10 or 15 minutes.

That is one bedraggled looking bird.


Jenkins called Tri-State Bird Rescue & Research in Newark, Delaware, and stayed with the eagle until a rescue crew arrived.

Lisa Smith, executive director of the rescue center, said when the eagle arrived, it was wet and cold. The eagle, a 5-year-old male known only by its case number, 2237, received a full examination, X-rays and fluids. Workers at the center are keeping him dry and warm.

The eagle tested positive for lead poisoning, which damages the brain and causes birds to be subdued. It later was diagnosed with a respiratory illness. It is currently receiving chelation therapy to remove the lead and antibiotics for the respiratory illness.

You know, I 'd probably do the same, but in my head I know that Bald Eagles are nearly a dime a dozen here on the Bay, and a few are going to die every year, and it's not worth risking a finger for (those bill are wicked).

If it's lead poisoning, chances are it got it by eating a duck, or some carrion, with a shotgun pellet in it. Shotgun ammunition used for hunting over water is now supposed to be steel or other non-lead shot to prevent that.
Posted by Fritz at 7:11 PM