Something Fishy About Striped Bass in Chesapeake Bay

I normally deride the Bay Journal as the house organ of the EPA Chesapeake Bay program, but Karl Blankenship has actually published a thoughtful article on the spat between recreational and commercial fisherman over Stripped Bass management on the Atlantic Coast:


For years, striped bass were a textbook example of successful fishery management.

After a dramatic population crash in the early 1980s, a painful harvest moratorium was put in place. As hoped, the population rebounded. By 1995, it was declared “recovered” — and even then the population continued to climb.

By the early 2000s, commercial fishermen and recreational anglers were seeing more large striped bass than at any time in recent memory.

Fast forward another decade, to 2014, and the picture is starkly different. The spawning population is at about the same level it was in 1995, when it was declared recovered, but instead of trending upward, it’s been declining for a decade.

It is expected to drop below the “recovered” threshold level next year.

As a result the Atlantic States Marine Fisheries Commission (ASMFC) is looking at harvest reductions of about 25%. Recreational groups tend to favor immediate, and strong enforcement of the reductions, hoping to get the population rebound soon, while the commercial sector favors an incremental approach to protect the industry while the restrictions take place.  Recreational fishermen perceive (I certainly have perceived) a substantial loss in Striped Bass numbers in my fishing area:


Recreational fishermen do best when fish are very abundant. The fish are more easily found, and the commercial quota typically takes a smaller portion of the available population. As the population declines, recreational anglers with fishing lines are less efficient than watermen with nets, and have a harder time finding fish — even if the stock is still considered to be at a sustainable level.

That’s reflected in ASMFC figures which show spikes in recreational harvests when the striped bass population hit its peak in the early 2000s. In fact, the estimated dead discards from the recreational fishery along the coast — those fish that are caught and released, but die anyway (about 9 percent of the released fish) — exceeded the entire commercial catch as recently as 2006.

Think of it this way. Striped Bass are very much a schooling fish, using the power of their own numbers to enable them to feed. When they are very abundant, large dense schools of striped bass are found all over the Bay.  When they become less abundant, those schools don't become less dense, they become fewer, smaller, and with more space in between them.  Much harder for recreational fisherman to find on the spur of the moment. On the other hand:


Commercial fishermen, equipped with large boats, nets and often decades of individual and community knowledge, are efficient. They typically can catch their given quota despite competition from recreational anglers, as long as the stock is at a healthy level.

My concern is that the Atlantic Multidecadal Oscillation appears to be going into a cold phase, which not only means lousier weather (if colder is lousier) for us on the East Coast, but is also worse for the recruitment of Striped Bass.

If the situation is down, and promises to be getting worse due to the AMO, I would think that we should be looking for sharp changes to protect the stock more.  Now how about some more Dr. Julie Ball? 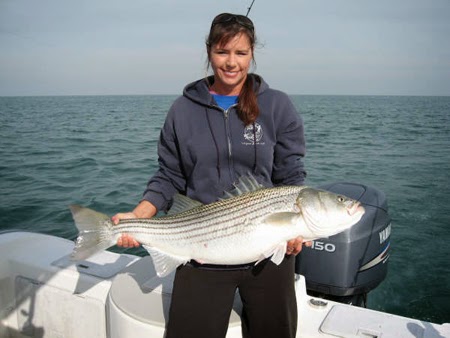 Sorry, no bikini.  Striper season is cold down in Virginia.
Posted by Fritz at 5:58 PM