It's Good to be the King!

King Tut was buried with 2 knives.  One was made of gold, and the other made of iron, before iron smelting: 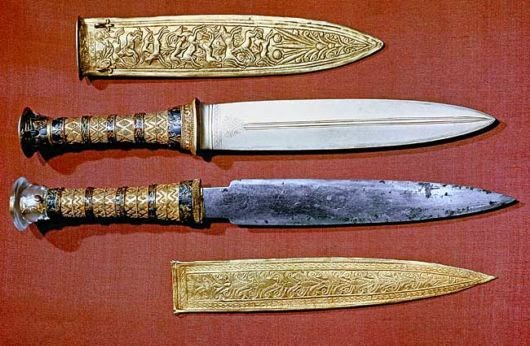 The deceased king was accompanied to the afterlife by two obviously personal favorite knives, both double-edged daggers in form, pretty close 3000-year-old equivalents of the Randall Model 2 Fighting Stiletto.

What is most interesting though is that King Tut’s personal daggers were made in the Bronze Age of other metals. One knife is made of gold, hardened with copper. The American custom knife-maker Buster Warenski (1942-2005) took it as a personal challenge and successfully completed in 1987 a replica. That project required five years of work and used 32 ounces of gold.

The second knife is made of iron, at a time in which the forging of primitive iron weapons was a new technology invented by the Hittites. Even in the future, when the Greeks would be besieging Troy, Achilles and the other heroes would still be armed with bronze swords and bronze-tipped spears. It’s good to be the king. Tutenkhamun possessed, and got to take with him into his tomb, the superb iron-bladed knife seen above. Modern analysis has determined that it was forged from meteoric iron, and though it lacked the complete rust-and-stain-resistance of the gold blade, it undoubtedly took a better edge and remained sharper longer. In 1300 B.C., iron would have been rarer and more expensive than gold. I think this knife may have been intentionally made with a ricasso, a flat, unsharpened area above the grip, which would allow the user to hold the blade farther forward for precision cutting.

Brother Ted would be so jealous.
Posted by Fritz at 5:00 AM