Fight On, Fight On, Redskins! 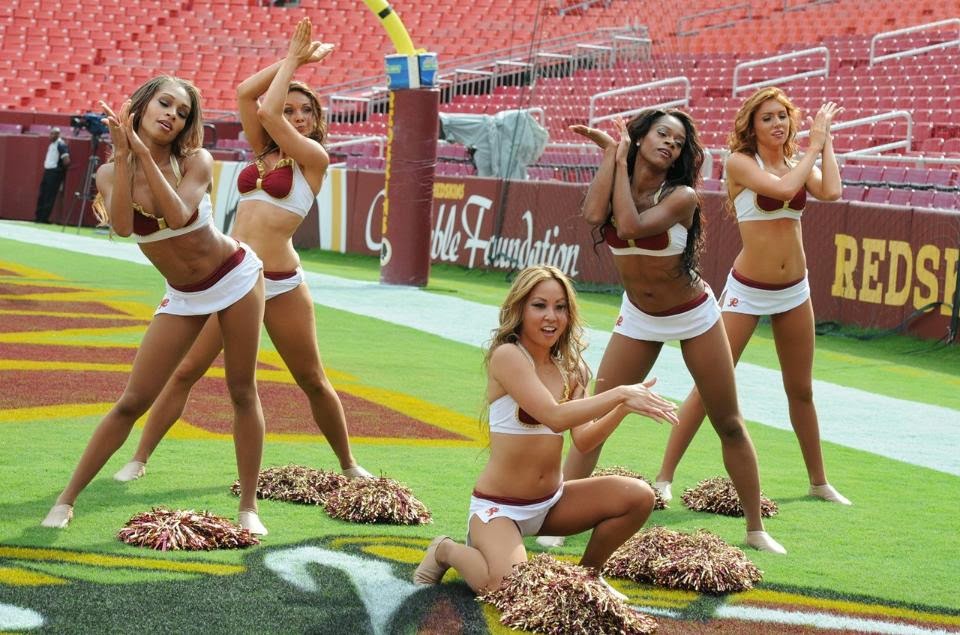 For Thursday Night Football tonight, Don Snyder's hapless Redskins (1-2) meet the New York Giants with the same 1-2 record, at 8:25 PM EDT. May God have mercy on their souls Also their arms, legs and heads. May the team with the best cheerleaders win. 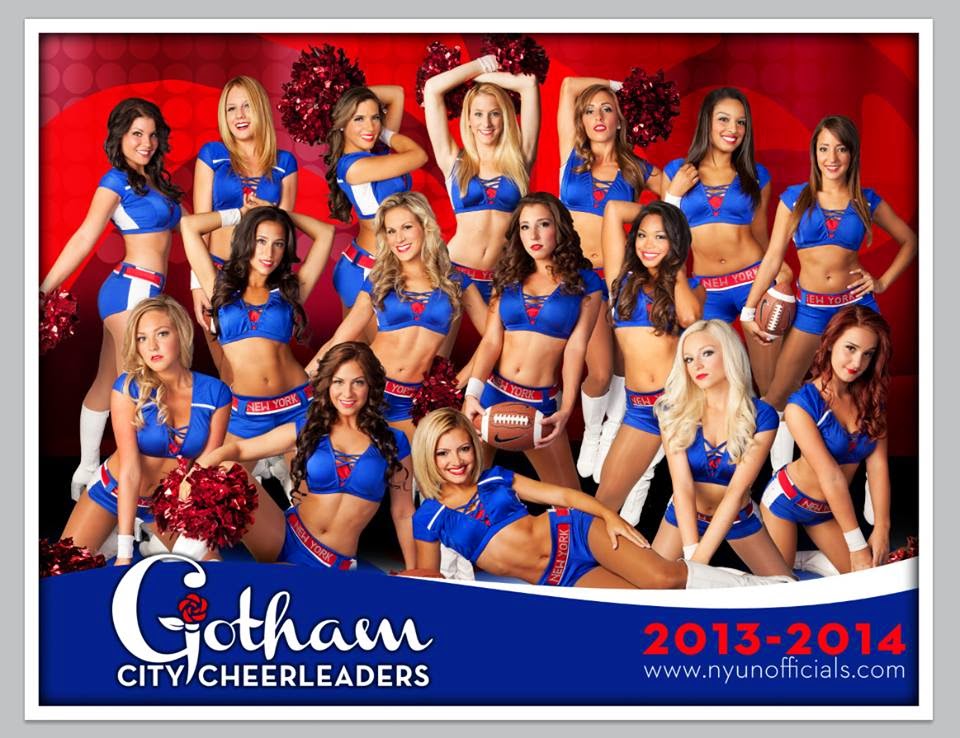 One of the lesser known facts about the New York Giants is that they are the only NFL team the gets by without an associated team cheerleading squad. How can they expect to win without professional cheerleaders? Fortunately, New York City has a collection of dancers (whoda thunk?) called the Gotham City Cheerleaders who cheer for the Giants as well as other New York City teams.

Meanwhile, the liberal war against football continues to be waged in the news. Actual comments from the Huffington Post: 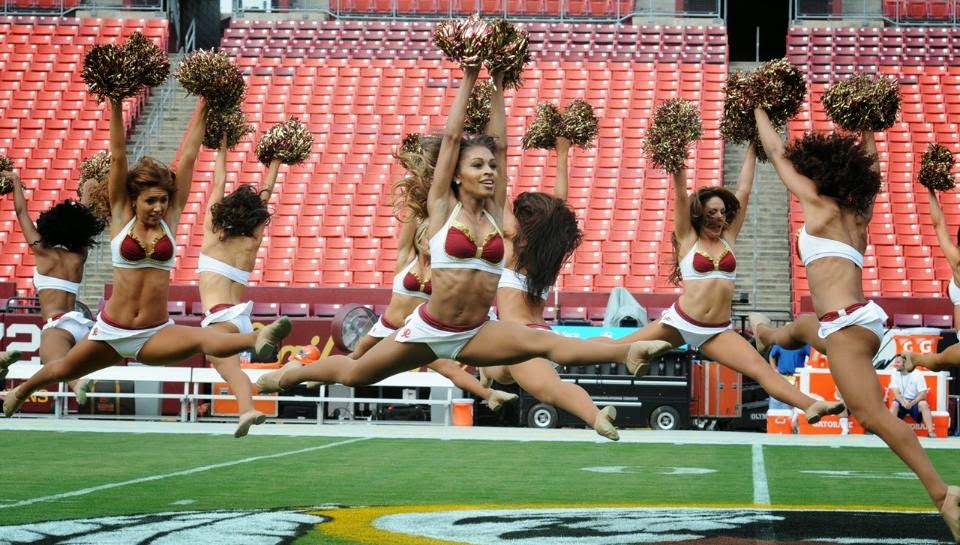 The Beta Male War on Football and Biology


. . .The point I’m ham-handedly trying to make is that a component of the war on normal is a war on the traditional male. Hollywood no longer casts male leads in action films, it seems. Instead, we get pixie stick women in Lycra body suits manhandling, as it were, the male toughs. The male toughs are always hairy steroidal white guys or steroidal black guys. It’s why the schools are pumping boys full of drugs so they sit there and pay attention. It’s why colleges want to throw horny frat boys in prison for banging drunk chicks.
The war on football is, of course, an easy insertion point for the dimmer members of the sporting press to get in on the act.


One of the saddest and most revealing details about the Adrian Peterson child abuse allegations/indictment is this reportedtext exchange with the mother of one of the children who was whipped.
“… toughest of the bunch,” Peterson wrote. “He got about five more pops than normal. He didn’t drop one tear! So that was another indicator I’ll have to try another system with him. SMH he’s tough as nails …”
The mother replied: “Well you can’t hit him til he cries! That’s just mean. He’s trying to be strong for you. He’s afraid of you. He’s 4, he’s not playing mind games with you …”
Peterson was trying to make his child into a man before the boy can even form and express complete thoughts. He’s even excited about the challenge, as if facing down a would-be tackler. The child is trying to prove his own mettle, probably because he wants his dad to be proud of him. It’s the same thing Peterson did with his own father, as a child and into his college years, when he dazzled the football world with his toughness as his dad sat in jail.

Adrian Peterson scored a 16 on his Wonderlic. This is a test I’ve taken many times and administered many times. It is not a valid IQ test for a number of reasons, but it is a decent approximation for people who have attended college. Peterson probably has an IQ of around 90. Employers using the Wonderlic are told that a 20 is the minimum for a job stocking shelves in a warehouse. In other words, Adrian Peterson is probably too dumb to understand any of this. . . 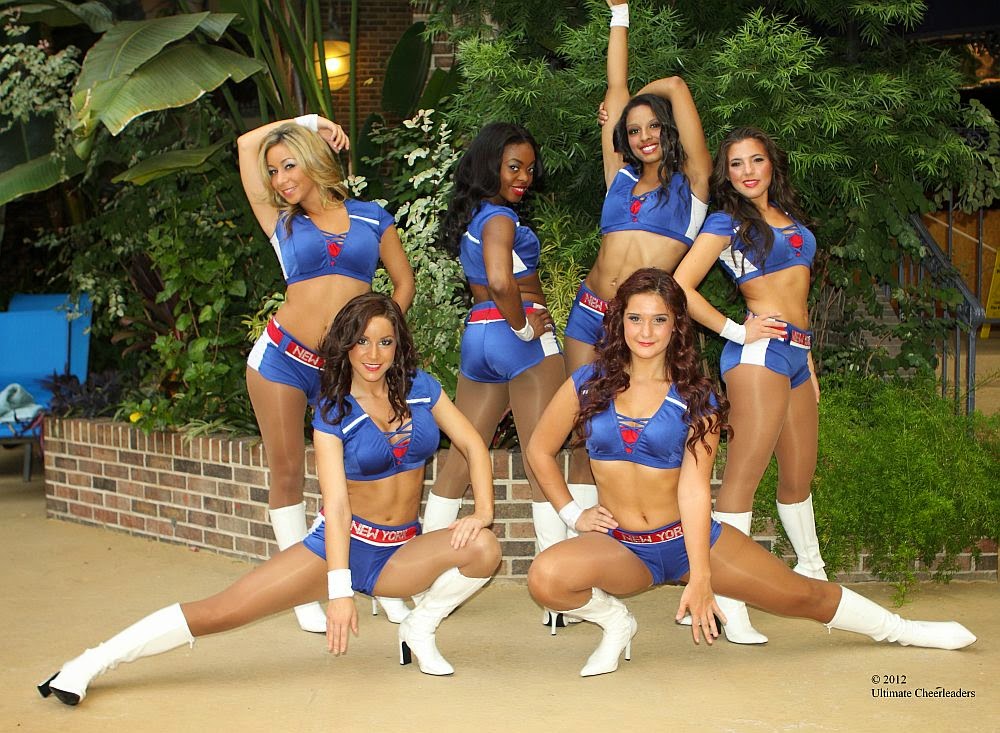 
In recent weeks, you’d think that the fate of justice in America depends on how harshly the NFL punishes a few miscreants. Only if Ray Rice and accused child-abuser Adrian Peterson are banished from the game do women and children have a chance of living in a country where they are safe from violence and abuse.

This is patently absurd. Even if the NFL is spectacularly successful, it is still just a sports league. More specifically, it is a business that stages violent spectacles that will damage the brains of some significant portion of its participants. We really shouldn’t be expecting it to set our society’s standards. 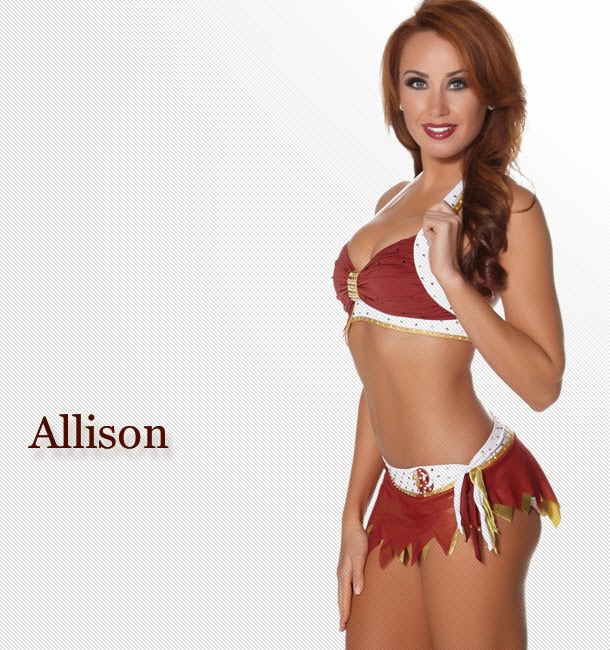 Ace points out that the media also has it's fair share of domestic abusers on staff, and no one is seriously talking about shutting down any major news outlets as result:


Does The Media Have a Domestic Violence Problem?

It's actually a good question. This isn't about domestic abuse, actually -- no one actually defends domestic abuse -- but the media's interest in connecting individual misdeeds to a "culture of corruption" for some industries, but not others.

And never their own, certainly. . .when an institution is right-leaning -- or simply not left-leaning-- the media goes into attack mode to degrade it (as Obama might say), to humble it, to disrupt it, to bring it down a peg, to bring it to heel -- to show it who's boss, in terms of institutional power.

So Jeffery Lord at the American Spectator had a question -- Have there been any recent domestic-violence charges involving people working for the US legacy media?
The answer may surprise you.

Just kidding, the answer won't surprise you at all. 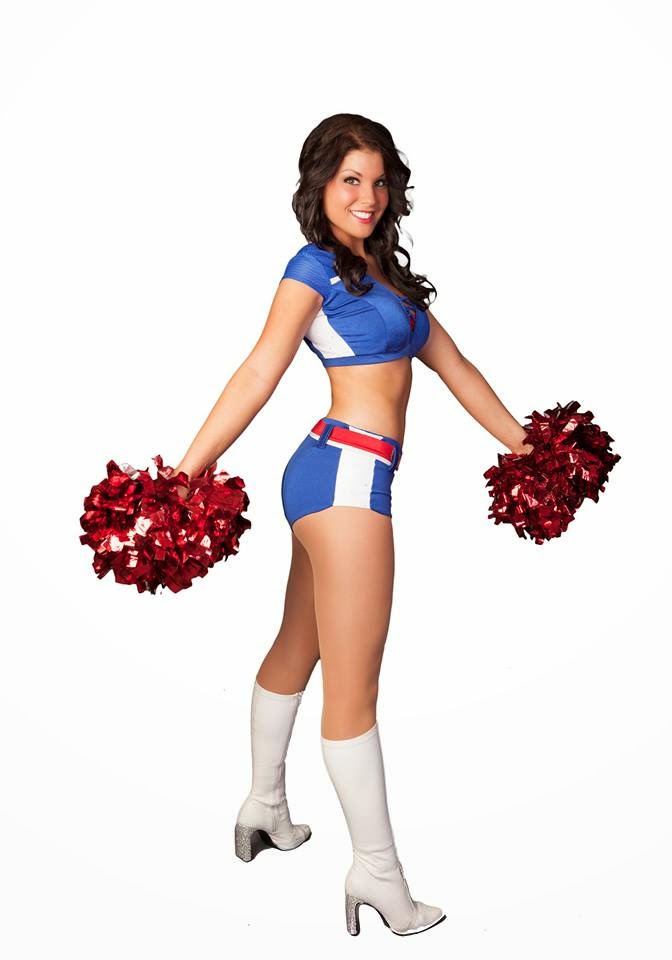 
The National Football League might be reeling right now, but lawmakers seeking to strip the league of its tax-exempt status face a tough fight.

Senate Majority Leader Harry Reid (D-Nev.), who has long been angered by the Washington Redskins team name, is among the lawmakers targeting the NFL as the league tries to recover from its handling of a recent rash of domestic violence and child abuse incidents.

Reid’s teamed up with Sens. Maria Cantwell (D-Wash.) and Tim Johnson (D-S.D.) to propose taking away the NFL’s tax exemption, for as long as it promotes the Redskins name.

Sen. Cory Booker (D-N.J.), himself a former Stanford football player, has a proposal that would scrap the exemption for all professional leagues, and send the proceeds to domestic violence prevention programs.

But lawmakers who have long battled the tax exemption don’t see any reason to believe Congress will act soon.

“It think it’s posturing,” Sen. Tom Coburn (R-Okla.), who has long led the fight against the NFL’s tax-exemption, said about the new bills from his colleagues. “You see the NFL’s getting some negative deal, and now you jump on a bill?”

I have no problem with getting rid of the NFLs tax exemption, as long as it's done to all other professional sports at the same time. And stop building stadiums for them, you morons. By way of Wombat-sochos "Live at Five: 09.24.14" Megan McArdle on how not to help your cause: Don't Ever Appear on 'The Daily Show'


In mid-September, some Washington Redskins fans agreed to go on "The Daily Show" to defend the team’s name. In the course of negotiating their appearance, the fans asked whether they would be confronted by American Indians on the show. The producers said no, and then surprise! They were ambushed by irate American Indian activists.

Before we go any further, I'm in favor of changing the team’s name. I don’t want to get into a tired debate; my general position on such matters is that whatever its history, "Redskins" is now viewed as an epithet, and ladies and gentlemen do not use offensive epithets when they can avoid doing so. Moreover, while I understand that the fans love their team, one hopes they are attached to the folks who play the game, not whatever name they happen to go by.

That said, my hopes for the team’s future reincarnation as some warlike animal, perhaps the "Senatorial Aides," do not mean that I will countenance anything in the name of the cause. I’m with Mark Kleiman on this: It’s unacceptable to lie to interview subjects -- especially members of the public, who probably do not have PR flacks and image consultants to assist them.

This appears to be something of a standard practice for "The Daily Show" when interviewing its ideological opponents. It is not good journalistic practice, which is why so many millennials should take Jon Stewart at his word and not treat the show as news. However, I’m sure millennials will continue to do so, and the show’s producers will continue to supply them with dubious antics, so here’s a guide for people who do not share the show's politics but are considering going on it anyway: 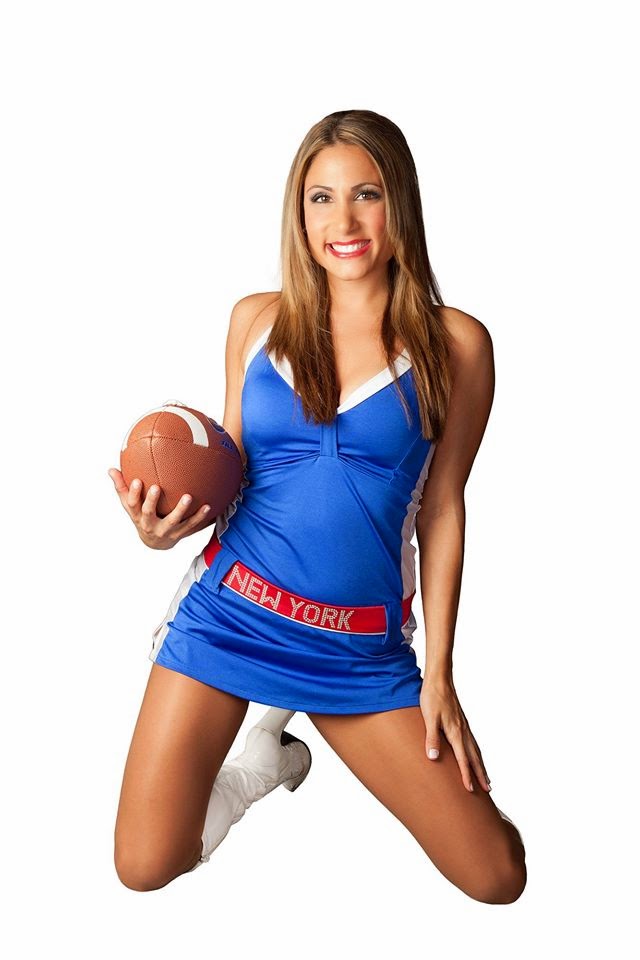 More good advice in the same vein. The only thing more dangerous than a media person who doesn't know what he's talking about it one who does.

I reiterate from last week. I don't care what Roger Goodell knew and when he knew it. Football is Goodell's job, not law enforcement. Law enforcement apparently thought that what Ray Rice did was not so unusual as to be worthy of a trial and potential punishment. That should be good enough for the NFL and the media, unless they are willing to live by the same standards. And they aren't. 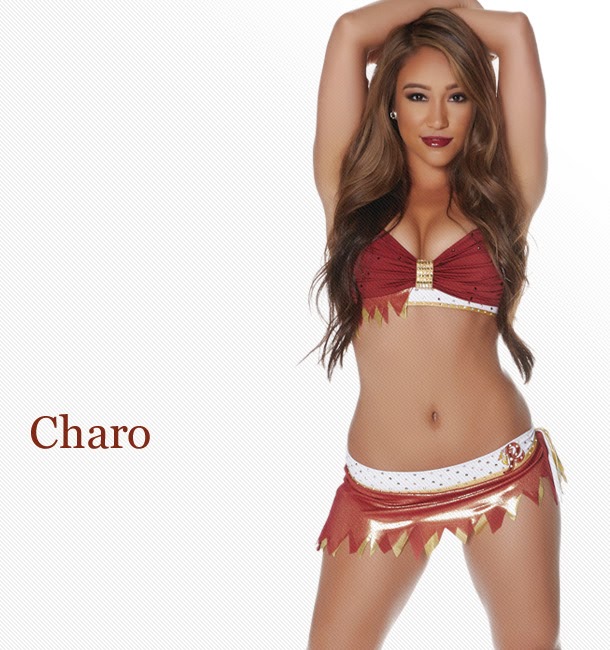 
Needless to say, Colin Kaepernick had a game he'd like to forget after last week's 28-20 loss to the Bears.

The 49ers quarterback was responsible for four turnovers in the team's loss, but it was a curious flag that has also drawn attention.

After throwing an interception that set up a Bears touchdown, Kaepernick allegedly used a racial slur, according to the refs.

Kaepernick was fined more than $11k for the alleged slur, but denied saying anything. 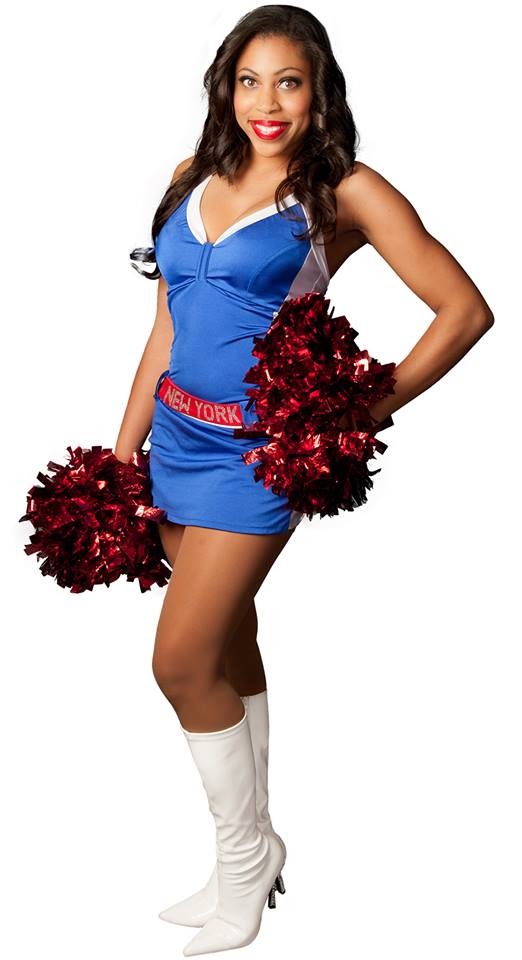 An Oklahoma woman says in a lawsuit that Dallas Cowboys owner Jerry Jones paid her for at least four years to prevent her from reporting an alleged sexual assault.

Jana Weckerly's attorney, Thomas Bowers, filed an updated lawsuit Monday that accuses Jones of forcibly touching Weckerly's genitals and kissing her on the lips without her consent more than 5 years ago, then bullying her into not reporting the alleged attack. The lawsuit seeks more than $1 million in damages.

Jones has denied Weckerly's allegations and the Cowboys on Wednesday referred to an earlier statement from Jones attorney Levi McCathern calling the claims "completely false."

"This is nothing more than an attempt to embarrass and extort Jerry Jones," McCathern said in the statement made immediately after the lawsuit was initially filed Sept. 8.

I demand Goodell view the tapes! There have to be tapes, doesn't there?

Linked at Proof Positive's weekly "Best of the Web." Wombat-socho is celebrating Rule Five Sunday on Monday this week.
Posted by Fritz at 8:00 PM